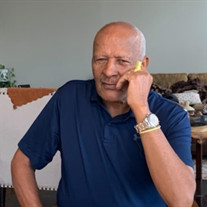 In Loving Memory of Yacob Tekie Hawki January 1, 1938 – December 28, 2021 Yacob Tekie Hawki passed away peacefully at home in Virginia after a long fight with prostate cancer on December 28, 2021, surrounded by family. His beloved and loving wife, his children, grandchildren, brother, and sister survive him. Yacob Tekie was born in 1938 to his father Tekie Hawki and mother Letekidan Bayru in Zagir, north of Asmara, Eritrea. He grew up under the loving care of his parents and grandfather. He had two sisters and two brothers. He attended elementary school in Zagir and helped his family in farming and cattle herding. Most of his childhood was spent in Semenawi Bahri, a mountainous place known for its olive trees. This wondrous and magical place shaped his life and made him who he truly was - a strong, honest, brave, and proud man. As he came of age, he ventured out of Zagir and headed to Asmara, where he enlisted in the police force. Soon after that, he married his beloved wife, Belaynesh Girmatsion, in 1964. Their journey together has been one of love, respect, and dedication. As a police officer, he was first stationed and spent 4 years in the city of Keren before moving back to Asmara. In 1977, he was forced to leave the city and move his family to Zagir due to increased unrest in the capital city. Yacob’s family started tending to their land and got reacquainted to a farming life. He then immigrated to Sudan in 1979 to seek further opportunities. There, he landed a job with an Italian construction company as a driver. That was followed by a few years of working as a merchant travelling on foot with a caravan of camels over long distances. His wife and children stayed back in Eritrea and he always dreamed of reuniting the family under one roof again. In 1985, Yacob and Belaynesh decided to move the entire family out of Eritrea to live in Sudan. The only way out of the country was to take the same route that Yacob and his merchant friends took during their travels. He was successfully able to settle his family in Kassala, Sudan but he continued to aim higher and search for further and more durable opportunities for his children. His primary goal was to secure educational opportunities and a stable living environment. They successfully immigrated to the United States in 1990 with the help of family members and settled in Arlington, Virginia. He worked in Washington D.C. driving a pickup track towing hotdog carts from their garage to their location in the streets and back at the end of the day. Yacob was proud to see his 7 children succeed in school and their careers. He was blessed with many major life events, the pinnacles being the marriages of all his children and the birth of 18 grandkids. Following his retirement in 2010, he spent quality time with his children and grandchildren. Another highlight of his retirement years was travelling back to his beloved country of Eritrea many times and spending time with his extended family there. He was most joyful when he was surrounded by his grandchildren who affectionately called him Aboy (the Tigrigna word for Father). Anyone who knew Yacob knows how fondly he recalled his childhood time spent with his grandfather, Hawki Tesfu, and loved telling stories about him. Yacob will be remembered for his straightforwardness, loyalty, trustworthiness, and patriotism as well as his devotion to friends and especially his family. He was a man who loved going on long walks and visiting with friends. “Do not let your hearts be troubled. You believe in God; believe also in me. My father’s house has many rooms; if that were not so, would I have told you that I am going there to prepare a place for you? And if I go and prepare a place for you, I will come back and take you to be with me that you also may be where I am.” (John 14:1-3)

The family of Yacob Tekie Hawki created this Life Tributes page to make it easy to share your memories.

Send flowers to the Hawki family.