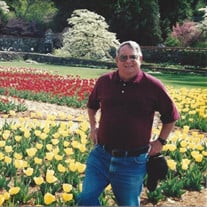 Wouter Karel Vanderwal (aged 83) passed away on Tuesday, April 13, 2021. He is preceded in death by his loving wife of 28 years, Victoria Marie Vanderwal. He is survived by his daughter, Julia Tomiak (Bill) and his grandchildren, Alexander, Rose, Josh and Eli Tomiak. Wouter, known to friends and family as “Van”, was born on October 26, 1937 in Padang, Indonesia, which was at that time a colony of The Netherlands. When the Japanese invaded in 1942, Van and his mother were placed in one internment camp and his father was placed in another and did not survive. At the end of WWII, Van and his mother returned to The Netherlands. After completing university studies, Van immigrated to the United States in 1963 and became a naturalized US citizen in 1966. He was drafted into the US Army and served for 26 years in the Signal Corps, including a year in the Vietnam War. He earned numerous awards and honors, including the Legion of Merit, the Bronze Star Medal, the Defense Meritorious Service Medal, and multiple Vietnam service medals. Van met his wife Vicki in El Paso, TX and they were married in 1968. Van retired from the Army as a Lieutenant Colonel and worked afterward as a defense contractor. After his permanent retirement and the death of his wife, he volunteered for many years for the Fairfax County Police Department. He also enjoyed traveling, especially birding trips and tours of historic American Civil War sites. He is known for enjoying a good joke, a good meal, and readily extending help to family and friends. A private service will be held at Jefferson Funeral Chapel on Saturday, April 24th, 2021. In lieu of flowers, the family requests that you make a donation to either, the National Audubon Society (www.audubon.org) or the Society of Civil War Historians (www.historians.org) in Van’s honor.

Wouter Karel Vanderwal (aged 83) passed away on Tuesday, April 13, 2021. He is preceded in death by his loving wife of 28 years, Victoria Marie Vanderwal. He is survived by his daughter, Julia Tomiak (Bill) and his grandchildren, Alexander,... View Obituary & Service Information

The family of Wouter Karel Vanderwal created this Life Tributes page to make it easy to share your memories.