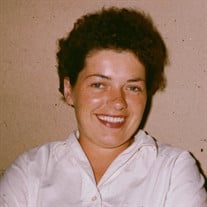 After a long illness, Winnifred Pearl (Durdle) Ball, known as “Winnie,” died on March 5, 2021 at her home in Alexandria, Virginia, USA, with her family nearby. Winnie was born March 15, 1936 in New Waterford, Nova Scotia, Canada to George Arthur Durdle and Melina Beatrice (Thorne) Durdle. Her paternal grandparents were William Durdle and Charlotte “Emily” (Mansfield) Durdle of New Melbourne, Newfoundland. Her maternal grandparents were William Thorne and Mary Ann (Austin) Thorne of Brownsdale, Newfoundland. The 11th of 12 children (including a stillborn son) born to George and Melina, Winnie grew up in a large family with 7 brothers and 3 sisters in the heyday of Cape Breton coal mining. She was fiercely proud of her family members, heritage, and Cape Breton upbringing. She often said you could take the girl out of Cape Breton but not the Cape Breton out of the girl. She proudly displayed a miner’s lamp in her home and showed it to anyone who came by for a visit. After Winnie married and moved to the USA, she still returned to Cape Breton every year until she was no longer able to travel. She made sure that her two children appreciated and understood their Cape Breton roots. After graduating from high school, Winnie moved to Halifax for a year and worked for Sears in the refunds department. Little did she know at the time that a slip on an icy sidewalk and resulting badly broken ankle would change the trajectory her life. Winnie moved back to New Waterford to recuperate and decided to become an elementary school teacher. She graduated from Nova Scotia Normal College and then taught school for 5 years, first in Scotchtown and then kindergarten in New Waterford. She left teaching to marry Thomas James Ball in Calvin United Church, New Waterford, in August 1961 and then move to his hometown, Chester, Connecticut, USA. Winnie and Tom lived in Chester, CT from 1961 until October 2004 when they moved to their daughter’s home in Alexandria, VA. Winnie’s hobbies included baking, cooking, gardening, reading, knitting, and all sorts of arts and crafts. She loved children, especially the youngest ones, and was known to sing nursery rhymes and entertain them throughout the years wherever and whenever she saw them. Neighborhood children liked to visit because she always had homemade cookies. Winnie was known as the ultimate hostess. She loved to plan, organize, and host parties ranging from backyard picnics and beach parties to large family reunions that were sometimes mistaken as the local community festival days. Winnie was an animal lover of all types and had a special lifelong connection with dogs in particular. She enjoyed all the wildlife that came through the backyard of her country home. Winnie loved her family and was always willing to try something new, especially if her children asked. She loved it when family and friends from Nova Scotia, Newfoundland, and Ontario came to visit. Her favorite vacation place was Cape Breton. Winnie is survived by: her loving husband, Thomas Ball (Alexandria, VA); daughter Karen A. Ball (Alexandria, VA); and son George E. Ball (Cape Breton). She is also survived by her sister-in-law Eileen (Gregor) Durdle of New Waterford. Additionally, Winnie is survived by many nieces and nephews and their partners: Dr. Brenda Mary Durdle (Jim MacDonald), William “Billy” Durdle (Donna), Joann Murray (Curtis), Linda Durdle, Norma Tower (Jim), Nancy O’Brien (Donald), Lynne Gillis (Duncan), Evelyn Nieforth (Donald), Joan Chafe (Dr. John), Donna Lee Coady, Alan Durdle (Cathy), Lorna Durdle Danchuk (Greg), Eva Doell (Brad), Rhona Reynen (Gordon), Heather Hello, and Hazel MacDonald. Winnie is also survived by longtime friends John and Kelly Magee of Chester, CT and their three children who in their childhood “adopted” Winnie as their grandmother: Cole, Grant, and Corinne Magee. It was a role she welcomed whole heartedly and cherished. Winnie was predeceased by her parents and grandparents. She was predeceased by all her siblings and all but one of their spouses: Earl Robert “Diddy” Durdle (Josephine “Jo” Johnstone), William Chesley “Ches” or “Dit” Durdle (Effie MacKay), Florence Belle Pyke (John Pyke), Allister “Diddle” Durdle (Edith “Tootsie” Meyer), Norman George Durdle (Elfrieda Helena “Fiddy” Althoff), Edward Lawrence Durdle, Leonard Durdle (Gladys Murrant), Ruby Myrtle MacDonald (Roderick MacDonald), Ronald Bernard “Moe” Durdle (Brenda MacLeod), and Hazel Neville Durdle. In addition Winnie was predeceased by nephews Allister “Butch” Durdle, Jr., Edward Gregor Durdle, and George Archibald Durdle. Now that she has joined them, Winnie is probably busy organizing a reunion party for all the deceased family members she has missed so dearly. The Jefferson Funeral Chapel in Alexandria, VA is handling final arrangements including cremation. Due to the pandemic, there are no calling hours. Private services will be held at the convenience of the family at a future date. Donations may be made online to the Animal Welfare League of Arlington VA at www.awla.org/donate/donate-online/ in Winnie’s memory.

The family of Winnifred Pearl (Durdle) Ball created this Life Tributes page to make it easy to share your memories.

After a long illness, Winnifred Pearl (Durdle) Ball, known as...