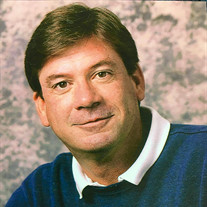 William “Skip” Wood, 57, of Alexandria, Virginia, passed away Sunday, October 6, 2019. He was born September 3, 1962 in Harrisonburg, Virginia, and spent most of his childhood in Manassas and Virginia Beach, VA. He was the son of the late Sherry and Bill Wood and the brother of the late John Wood. He graduated from Kempsville High School in Virginia Beach and received a BA in Communications Studies from Virginia Tech where he studied print journalism. Upon graduating, he was a sportswriter for the Daily News Record in Harrisonburg, VA and then continued his sports writing career at the Richmond Times-Dispatch. He then became a national award-winning sportswriter for USA Today where he broke and covered stories for the NFL, NBA, NASCAR and college football. He covered 12 Super Bowls, as well as the NBA Finals, men’s and women’s NCAA Final Fours, Daytona 500s, national college football championships and the Olympics. He investigated the death of Dale Earnhardt that prompted upgraded safety measures and other non-sports stories like the Virginia Tech shootings, 9-11 terrorist attacks and the devastation of Katrina in New Orleans. Later in his career he was a writer for WJLA.com and most recently Patch.com. He was an amazing writer, wordsmith and a walking grammar book. He had a passion for politics and loved classic rock and the Grateful Dead, mainly on vinyl! He was a beach worshiper and enjoyed getting “rays” in our backyard or anywhere in the sun. He was married to his beloved wife, Bonnie, for more than 21 years. His sons, Campbell and Branson were his biggest pride and joy. Relatives and friends may gather at Jefferson Funeral Chapel, 5755 Castlewellan Drive, Alexandria, Virginia, on Saturday, October 12, 2019 from 3-6PM. A small service will be held at a later date at Massanetta Springs in Harrisonburg, VA. In lieu of flowers, a GoFundMe page has been set up for the boys he treasured at gf.me/u/vu646z or www.gofundme.com and search "Skip Wood." Contributions can also be sent to Massanetta Springs Camp and Conference Center, 712 Massanetta Springs Road, Harrisonburg, Virginia, 22801.

The family of William Inskeep Wood created this Life Tributes page to make it easy to share your memories.

Send flowers to the Wood family.