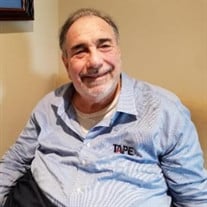 The family of William “Bill” Jaffe created this Life Tributes page to make it easy to share your memories. With profound sadness, Technical and Project Engineering, LLC (TAPE) announces that Executive Vice President/Chief Growth Officer William “Bill” W. Jaffe passed away on August 31 at age 71. While his death was sudden and unexpected, Bill had been in ill health in the preceding months. After a 25-year consulting, management, and executive career including stints at Marriott Corporation, Amtrak, CACI, and 8(a) contracting firms, Bill co-founded TAPE in 2003 shortly after marrying Louisa Long Cullem (now Louisa Jaffe). While Bill wore many hats in helping to build TAPE into a respected government contracting firm, his true passion was business development, particularly putting together teams to pursue contracting opportunities. As many of his colleagues within TAPE and among our partner firms know, Bill rarely saw a contract opportunity that he did not think TAPE and the right team could successfully pursue, win, and execute. Bill had an infectious enthusiasm and work ethic, often perfecting proposals and holding meetings seven days per week and sending emails in the early morning hours. He was legendary for rarely saying “no” to a teammate’s request for support. True to form, Bill spent the weekend before his death supporting a quick-turn Army opportunity and was working into the afternoon of August 31. With Louisa’s being a service-disabled veteran of the Women’s Army Corps and U.S. Army Reserve, Bill was also passionate about hiring veterans to allow them to continue their service to our country. Bill had many hobbies and interests including a love of science fiction/fantasy. He enjoyed interacting with a broad community of board game players in the railroad genre. Additionally, Bill loved buying and selling games and books on eBay. He was a very fast reader and could consume an enormous amount of extracurricular reading each week. As much as Bill loved government contracting, he cherished his roles as husband, father, and “Papa Bill” to his grandchildren. Bill is survived by his wife Louisa, daughter Karen, stepdaughters Jen (Zach) and Sarah (Tim), and step grandchildren Solomon, Max, and Claire. He also is survived by his brother Todd and sisters Maralyn and Lynn. He is predeceased by his son Bill Sydney Jaffe. In lieu of flowers, the family requests that a donation be made to either Wounded Warrior (woundedwarriorproject.org/) or The Camaraderie Foundation (camaraderiefoundation.org/) in Bill's honor.

The family of William "Bill" Warren Jaffe created this Life Tributes page to make it easy to share your memories.

The family of William “Bill” Jaffe created this Life Tributes...