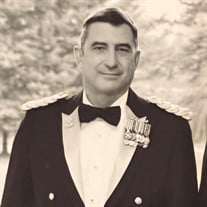 COL (Retired) William “Bill” M. Ford, age 68, of Alexandria, VA, went home to be with the Lord on 1 February 2022. Bill is survived by his loving wife, RosaLee, his children Kim Kopeski, Jessica Friedman (Jeff), Anna Wedel (Jason), Matthew Ford (Carolyn), and dog, Finley. Also known as “Poppy,” he thoroughly enjoyed spending time with his seven grandchildren: Gavin Ford, Madelyn and Sophia Wedel, and Ford, William, Michael, and Olivia Friedman. Born in Philadelphia, PA, on 29 March 1953, Bill grew up in both Pennsylvania and Alabama. In 1975, he graduated from Jacksonville State University with a BS in Accounting and Economics and entered into the U.S. Army that same year. In 1984, Bill graduated with an MBA from Syracuse University, and an MS in National Resource Strategy from the Industrial College of the Armed Forces in 1997. A patriot through and through, Bill dedicated his life to selflessly serving his country as a Finance Officer in both the U.S. Army active duty (30 years) and U.S. Army civilian service (12 years). His tours included Germany, Hawaii, Iraq, Kosovo, Italy, and his homeland. Bill’s honors and awards include the Defense Superior Service Medal, Legion of Merit, Bronze Star Medal, Meritorious Service Medal, and the Superior Civilian Service Medal, among many others. Bill was a leader, mentor, and friend who cared greatly for his soldiers, employees, and coworkers throughout the entirety of his career. Bill finally retired from service in December 2019. When he wasn’t in the office counting pennies for the Army, Bill enjoyed counting the pennies in his own coin collection. He enjoyed taking cruises with RosaLee, spending time laughing with his children and grandchildren, going to the beach with family and good friends, traveling through Europe with his family and dear friend, Art Kron, and sipping his way along the Bourbon Trail with his good friend, Dave Reed. He was a humble man who unconditionally loved and took great care of his family and friends. Bill and his jokes are already dearly missed by all who knew and loved him. His soul now rests with God as he rejoices in life eternal. Bill’s memorial service will be held on be Friday, June 3rd at 11:00AM at the Old Post Chapel at Arlington National Cemetery with a graveside service to follow. In lieu of flowers, donations in memory of COL William “Bill” M. Ford can be made to the Schar Cancer Institute at the following link: https://support.inova.org/page/3749/donate/1

The family of COL William "Bill" M. Ford created this Life Tributes page to make it easy to share your memories.