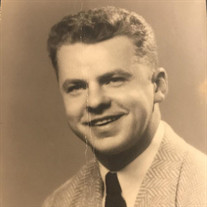 Walter Thomas Barnes passed peacefully at The Fairfax on August 26th, 2020 at the age of 94. He was born in Lynn, Massachusetts to his loving parents Edward and Irene Barnes. Walter served in the United States Navy Armed Guard during World War II. He received his undergraduate degree from Fordham University in the Bronx, New York where he played collegiate baseball. He went on to receive his law degree from Georgetown University. Mr. Barnes began his career in the Department of Justice as a clerical employee of the FBI and then in the Internal Security Division. He became an Assistant U.S. Attorney in Washington, D.C. and led two United States Organized Crime Strike Forces, in Boston, MA and Baltimore, MD. He participated in the successful trials of several major organized crime figures in New England. Mr. Barnes also became the head of the Election Fraud Unit of the Criminal Division which was followed by his appointment as Deputy Chief. During his service at the U.S. Department of Justice, Mr. Barnes received several meritorious and outstanding performance awards and retired after serving over 30 years. His brother Edward Barnes, who he admired greatly, also served the U.S. Department of Justice. Upon his retirement from Government service, Mr. Barnes was a longtime volunteer at Inova Mt. Vernon Hospital and Mt. Vernon Estate. Walter was an avid sports fan. His teams included the Dodgers, Redskins and Notre Dame. He also loved to follow professional tennis & golf, but his greatest joy was supporting his granddaughter in every sport she played. He was her first tennis coach, led her to play Division I in college and inspired her to pursue a passionate career in tennis. Walter also loved competing in the Northern VA Tennis League, especially with his wife as his partner. He was predeceased by his loving wife of 62 years, Arlene, his son Christopher and his brother Ed. Walter is survived by two children, Stacy Edwards, Kirby Barnes, his granddaughter Neely Zervakis and his caregiver Ali. He lived his life with honesty and integrity; he believed that family is number one, always give your best, be on time and never complain. In his honor, his family will be having a “Celebration of Life” September 12, in Seaford, VA and there will be a service at Arlington National Cemetery on a future date.

Walter Thomas Barnes passed peacefully at The Fairfax on August 26th, 2020 at the age of 94. He was born in Lynn, Massachusetts to his loving parents Edward and Irene Barnes. Walter served in the United States Navy Armed Guard during World... View Obituary & Service Information

The family of Walter T. Barnes created this Life Tributes page to make it easy to share your memories.

Walter Thomas Barnes passed peacefully at The Fairfax on August...

Send flowers to the Barnes family.