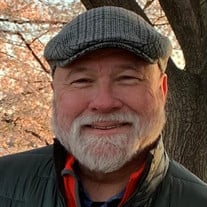 Wade passed away at home in Alexandria, VA on December 2, 2020 surrounded by loved ones. His peaceful passing was a gracious end to a long and heroic battle with cancer. Wade is survived by his wife of 40 years, Margaret “Peggy” Patten Otey, children, Leigh Otey Faha (Chris) and Tommy Otey (Zoe), grandson, Wade William Faha, and brother Kirkwood Otey III (Carol Lee), and many beloved nieces and nephews. While leaving us, he is reuniting with his mother, Mary Leigh Burleson Otey, father, Kirkwood Otey II, and sister Leigh Otey Cortez. Raised in Charlotte, NC, Wade graduated from East Carolina University in 1979 and embarked on a career in medical equipment sales and equipment planning. Wade’s ‘other’, and perhaps more defining career began in the Spring of 1975 when he picked up, and almost certainly knocked on, his first rugby ball. The community that Wade built through his years with the Charlotte Rugby Football Club (CRFC) surrounded him through his final days and will continue to keep his memory alive. Wade’s greatest joy came from supporting his children’s endeavors. From cheering loudly at Country Day Buccaneer football games to moving them across the country for school or work, his love took many forms. Long after hanging up his rugby boots when he and Peggy were empty nesters, Wade discovered cycling. Never being able to do anything halfway, Wade’s cycling adventures started with early morning and weekend rides, but quickly evolved into long distance bike touring. His cycling career culminated in an 81 day cross county trip from Anacortes, WA to Bar Harbor, ME. His passion for life behind the handlebars led him to pursue a position as a Tour Leader with the Adventure Cycling Association before cancer put an early end to his mileage. Wade’s crowning achievement is undoubtedly the family that he leaves behind. The love that surrounded him in his final moments is a testament to that. A celebration of life will be held at a later date in Charlotte, NC. Since moving to Alexandria, Virginia, Wade considered the Browne Academy community family and was comforted in knowing that Peggy will have the warm embrace of this incredible community in the months to come. In lieu of flowers, gifts in memory of Wade may be made to the Browne Academy Endowment Fund online at www.browneacademy.org, checks made out to Browne Academy can be mailed to Browne Academy, Advancement Office, 5917 Telegraph Road, Alexandria, VA 22309.

Wade passed away at home in Alexandria, VA on December 2, 2020 surrounded by loved ones. His peaceful passing was a gracious end to a long and heroic battle with cancer. Wade is survived by his wife of 40 years, Margaret &#8220;Peggy&#8221;... View Obituary & Service Information

The family of Wade Burleson Otey created this Life Tributes page to make it easy to share your memories.