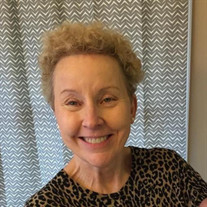 Victoria (Vicki) H. Binkley of Alexandria, Virginia passed away on Friday, February 18, 2022. She is preceded in death by her parents, Andrew and Loetta Haynie and her brother-in-law Howell Binkley. Vicki is survived by her husband Colonel (R)... View Obituary & Service Information

The family of Victoria "Vicki" H. Binkley created this Life Tributes page to make it easy to share your memories.

Send flowers to the Binkley family.