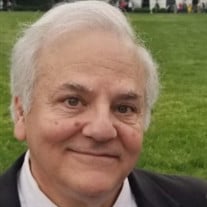 Dr. Thomas Ford Kalil, 68, passed away on May 18th surrounded by family both in person and over video. Tom was the loving husband of 42 years to Mary Ellen Kalil; Father of Colette, Leila, Mariah, and Anastasia; Grandfather of Joshua, Natalia, Agatha, Madeline, William, Zachary, Tomas, Annabelle, Gabriel, Lucia, Antonia, Alex, Kieran, and Ainsley; Brother of Darlene, Lou, and David; He was predeceased by his parents Ford and Renee Kalil. Tom was born in Oakridge, Tennessee, and later lived in New Mexico and Maryland during his childhood years. He attended St. John’s Catholic Highschool, in Washington, D.C. where he played trumpet in the band, participated in JROTC, played football, and, along with his team, won the All State Football Championship. He began his Bachelor’s of Science in Zoology at Mount Saint Mary’s College, in Emmitsburg, MD in 1971, and completed his degree at The University of Maryland in 1976. In 1978 he completed his Masters degree at Central Michigan University. In 1982, Tom proudly accepted his Juris Doctorate from The University of Baltimore. He spent his professional career working at the Department of Agriculture. In the mid 1980’s Tom built his own videography business, first called “Memories Unlimited” then “Thomas Kalil Video Productions.” He took a special pride in his work, knowing that he was helping other families capture some of their most treasured memories with their loved ones. Tom was also passionate about giving back to the community. In the early 1980s he joined a volunteer program to discourage children from picking up smoking, called “Clown’s Don’t Smoke.” In addition to completing the training for the program, Tom also learned magic tricks and the art of balloon sculpting and performed for free at an array of events, sometimes even taking his daughters along to assist. His clown act became a family tradition, and he continued to perform at family and church events throughout the years. Tom loved bringing a smile to children’s faces, especially those of his own children, grandchildren, nieces, and nephews. After retirement Tom fulfilled a life-long dream and became a published author. His creation, “When Scrooge Met Snoopy” married his love of his Christian faith, English literature, and the Peanuts cartoons, as it explored the biblical meanings hidden in the classic story “A Christmas Carrol” and the “Peanuts Christmas Special.” An enthusiast of the arts, Tom assisted and directed several plays for Sunday School and Youth Groups at both Holy Transfiguration Melkite Greek Catholic Church, in McLean, VA and Saint Bernadette’s Catholic Church, in Springfield, VA. He loved music and was an accomplished guitarist and trumpeter, as well as a self-taught dulcimer and piano player. He put great emphasis on his children learning music and participating in the arts, and supported his daughters in this by practicing music with them, videotaping their school plays, and attending their many choral and orchestra concerts. Tom had strong family values and wanted to ensure that he made many beautiful memories with his family that his children would always cherish. He loved to embrace the child within, and passed this wonder along to his family, who enjoyed family trips to Disney World, Tom’s famous puppet shows, and his expressive readings of stories with all of the voices included. A devout Catholic throughout his life, Tom attended Holy Transfiguration where, along with his parents and siblings, he was a founding member. He and his wife were married there, and their children and grandchildren have been baptized there. Tom loved attending many Bible studies over the years, especially those of his son in-law Fr. Sebastian Carnazzo. Tom’s family considers the Christian values that he instilled in them to be his greatest legacy. Tom’s family is so grateful for the love and support they have received since his passing. They have been overwhelmed by the beautiful stories people have shared of ways that Tom touched so many lives. The warmth of the many generosities and the Light of the countless prayers from family and friends is a tribute to the love Tom bestowed on others during his life. Tom’s family finds comfort in the words of Christ: “Do not let your hearts be troubled. You believe in God; believe also in me. My Father’s house has many rooms; if that were not so, would I have told you that I am going there to prepare a place for you? And if I go and prepare a place for you, I will come back and take you to be with me that you also may be where I am.” - John 14:1-3 May his memory be eternal!

Dr. Thomas Ford Kalil, 68, passed away on May 18th surrounded by family both in person and over video. Tom was the loving husband of 42 years to Mary Ellen Kalil; Father of Colette, Leila, Mariah, and Anastasia; Grandfather of Joshua, Natalia,... View Obituary & Service Information

The family of Dr. Thomas Ford Kalil created this Life Tributes page to make it easy to share your memories.

Send flowers to the Kalil family.