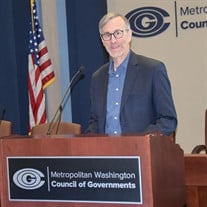 Stuart Alan Freudberg, 67, of Falls Church, Virginia passed away with his wife Lynn at his side on June 15, 2021, due to complications from cancer surgeries. Stuart was a family man, an environmentalist, retired executive, and an avid sports fan. Born on September 26, 1953 in Washington D.C., he moved with his parents to Massachusetts as a young child. In middle school, he participated in a summer program focused on environmental science, which marked the beginning of a life-long professional and personal passion. He had an appreciation for analyzing and predicting the weather, and often commented how close he became to becoming a meteorologist. He graduated from Rensselaer Polytechnic Institute with a degree in Civil Engineering and was proud to say that he “attended practically every hockey game” as an undergraduate. He earned a graduate degree from MIT and then moved to McLean, VA area to pursue his professional career as an Environmental Engineer. In Virginia he met his first wife Abby Mandel, who he married in 1979 and later had three children with. Stuart enjoyed collecting stamps and coins, traveling, and all sports – especially hockey, baseball, and tennis. He was a season ticket holder to the Washington Capitals and Washington Nationals. After many years of disappointing regular season and playoff losses, his family will always remember the joy he felt and shared with them after the Capitals 2018 Stanley Cup victory and Nationals 2019 World Series championship! He went on numerous trips with his boys, most memorably Cooperstown, NY, Toronto, Montreal, Vancouver, and to sporting events and U.S. Presidential Libraries. During the COVID-19 pandemic, Stuart dealt with many health issues but stayed connected by texting about sports and news with his sons, video chatting with his grandchildren, and looking at videos and pictures of their school and Little League successes. Stuart served on the Board of Leadership Greater Washington and multiple neighborhood associations for many years. He enjoyed working to improve organizational structures, communications, and efficiencies to deliver results to those served. He credits his experiences at Leadership Greater Washington with changing his life and increasing his confidence levels. Stuart worked at the Metropolitan Washington Council of Governments (COG) for 40 years, retiring on February 20, 2020 on the anniversary of the exact day he began in 1980, leaving behind a legacy of partnerships, programs, and plans to help the region work together on major challenges for decades to come. While at COG, Stuart met Lynn Gutter, and they married in 1998. Throughout Stuart’s career, he provided leadership in several of COG’s most meaningful efforts, such as the restoration of the Potomac River, climate change, emergency preparedness activities following 9/11, and funding and safety initiatives for the Metro system. The regional effort during the 1980s to restore the Potomac River was one of his top focuses as its poor health threatened the environment and future growth of the region. Today, the Potomac and Anacostia rivers attract area residents and spur economic development along their banks including Nationals Park where Stuart and his wife Lynn often attended games. Stuart will be lovingly remembered and missed by his wife of 22 years Lynn Gutter of Falls Church, VA; his mother Rita of Newton, MA; son Adam (Nicole Sweet) and grandchildren Evan, Noah, and Leah of Framingham, MA; son Michael (Jackie Cutrone) and granddaughter Lily of Brooklyn, NY; son Daniel (Beth Dion) of Arlington, VA; brother Jeffrey (Suzanne) and niece Rose and nephews Jeremy and Jake of Newton, MA; sister Audrey of Los Angeles, CA; mother-in-law Carole Gutter and brother-in-law Robert Gutter of Chicago, IL. Stuart was predeceased by his father Richard Freudberg. A funeral will be held on Friday, June 18 at 10:30 am at Temple Rodef Shalom, 2100 Westmoreland Street, Falls Church, VA. Masks are required if attending in person. The funeral service will also be live streamed on the temple website. Internment is private. In lieu of flowers, contributions may be made in Stuart’s name to: Newton Environmental Science Program at newtonenvisci.org, Cancer Research institute at www.cancerresearch.org, or to Chesapeake Bay Trust at cbtrust.org The family invites guests to Shiva being held on zoom on Saturday, June 19th. Topic: Freudberg Shiva Time: Jun 19, 2021 07:30 PM Eastern Time (US and Canada) Join Zoom Meeting https://templerodefshalom.zoom.us/j/91929190105?pwd=dHpqbk1XQUtZdFFoNnFVc2tvaVk5UT09 Meeting ID: 919 2919 0105 Passcode: 714792 One tap mobile +19292056099,,91929190105#,,,,*714792# US (New York) +13017158592,,91929190105#,,,,*714792# US (Washington DC) Dial by your location +1 929 205 6099 US (New York) +1 301 715 8592 US (Washington DC) +1 312 626 6799 US (Chicago) +1 669 900 6833 US (San Jose) +1 253 215 8782 US (Tacoma) +1 346 248 7799 US (Houston) Meeting ID: 919 2919 0105 Passcode: 714792

Stuart Alan Freudberg, 67, of Falls Church, Virginia passed away with his wife Lynn at his side on June 15, 2021, due to complications from cancer surgeries. Stuart was a family man, an environmentalist, retired executive, and an avid sports... View Obituary & Service Information

The family of Stuart Alan Freudberg created this Life Tributes page to make it easy to share your memories.