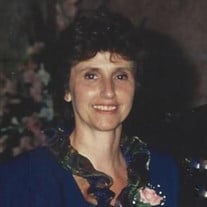 On Wednesday, February 3, 2021, the day after her 58th wedding anniversary, Silvana Lidia Missich Cautle passed away at her home in Springfield, Virginia with her loving husband by her side. Lidia’s background is quite unique as her parents were from different backgrounds: father Italian and Greek, mother German and British Maltese. Her father worked for the Italian government on the Island of Rhodes, an Italian territory at the time. During a family visit to the island, her mother, who was born and raised in Cairo, met her father. They later married and raised Lidia’s sister and brother in Rhodes. In 1944 during Christmas, her parents and siblings were detained and taken to the Island of Cyprus, a British leased territory at the time. There she was born in the city of Larnaca, baptized, and kept for a short time until her family was repatriated to Rome, Italy. Italy being in ruin after the war, Lidia’s family decided to move to Izmir, Turkey where her paternal grandparents resided. There she lived until meeting her husband, Richard William Cautle, on his first overseas assignment with the Air Force. While raising her two daughters, Linda and Annette, Lidia’s family enjoyed numerous assignments to Europe, Asia and the United States. During this time, she accrued over twenty years of service with the Department of Defense Dependent Schools. Throughout her life, she amazed people with her ability to speak five languages and shared this gift tutoring numerous children. Lidia settled in Springfield, Virginia with her husband over twenty years ago. She was warmly welcomed into the Fort Belvoir Catholic Community and became an active member of the Catholic Women of the Chapel and Military Council of Catholic Women communities. Her experiences with these ladies of faith were extremely enriching, and the friendships that were formed were a blessing. In 2007 and then again in 2016, Lidia received the Fort Belvoir Military Council of Catholic Women Martha/Mary Award. Lidia is survived and eternally loved by her husband, Richard William Cautle; her daughter, Annette Lynn Mack; her son-in-law, Wallace Preston Mack IV; her granddaughter, Francesca Silvana Mack; grandson, Preston Richard Mack; her nieces and nephews; her grandnephews and grandniece; and her great grandnephews. She was preceded in death by her beloved precious daughter Linda Ann Cautle; her brother, Lorenzo Missich; her sister, Ivana Braggiotti; her mother, Fernanda Langer Missich; and her father, Teodoro Missich. Memorial service will be announced in the near future. Funeral service and burial will be held later at Arlington National Cemetery. In lieu of flowers, donations may be made in memory of “Silvana Lidia Cautle” to Archbishop Carroll High School Foundation on the Donation page at https://www.archbishopcarroll.org

On Wednesday, February 3, 2021, the day after her 58th wedding anniversary, Silvana Lidia Missich Cautle passed away at her home in Springfield, Virginia with her loving husband by her side. Lidia&#8217;s background is quite unique as her parents... View Obituary & Service Information

The family of Silvana Lidia Missich Cautle created this Life Tributes page to make it easy to share your memories.