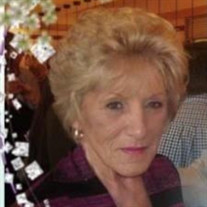 Shirley Ledbetter Wheby, 80, of Lorton, VA formerly Alexandria, VA, passed away peacefully on Sunday, August 15, 2021. Mrs. Wheby was born July 8, 1941 in Rockridge, West Virginia to the late Roscoe and Jettie Ledbetter. In 1955, she met John H. Keene, and they wed on August 15, 1960, and relocated to the DC area. They had one child, Sherry Lynn Keene-Witsman-Dyson. After retiring from Giant Food in 1998, Shirley enjoyed surrounding herself with family and friends, trying her luck at the casino, lottery tickets and playing bingo. She loved to cruise, travel, fish, and enjoyed the beach. Shirley was predeceased by her parents Roscoe and Jettie Ledbetter; her brothers Ronald, Roger and Wayne Ledbetter; her sisters Janet Ledbetter and Lois Bryant; her late husband’s John H. Keene and Michael F. Doyle; and her son-in- law Douglas Witsman. She is survived by her husband Joseph Wheby; her daughter Sherry and husband Danny Dyson; stepdaughter Lisa and husband Scott Wolfe; her grandchildren John and wife Sherry Witsman, Nichole Witsman and fiancé Stephen Ayres, Dana and husband Carl Fry, Garrett and Addison Wolfe; and her 5 great grandchildren Jocelyn, John, Jordyn, Raegan, and baby Fry to arrive in December. A celebration of life will be held at a later date.

The family of Shirley L. Wheby created this Life Tributes page to make it easy to share your memories.

Send flowers to the Wheby family.