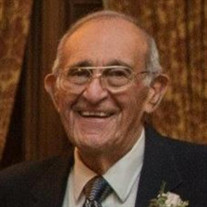 Seymour Wengrovitz, 92, of Springfield, Virginia, passed away on April 16, 2021. He was predeceased by his wife of 66 years, Judith Kanarick Wengrovitz (1931-2018), and his brother Paul Wengrovitz. He is survived by his three sons, Michael (Debbie), Phillip (Carolyn), and David (Anne) Wengrovitz; five grandchildren, Steven (Dan), Dan (Julia), Lauren, Andrew, and Austin Wengrovitz; and a great-granddaughter, Elise. Born in Brooklyn, New York, on March 2, 1929, to Oscar and Anna Wengrovitz, Sy grew up surrounded by family in his neighborhood of Brighton Beach. He attended Brooklyn Technical High School and graduated from City College in Manhattan in January 1951 with an engineering degree. He loved to tell the story of how he first met his future wife, Judy, helping to clean up at a college party and insisting on driving her home afterwards; they married in 1952. Moving to Springfield, Virginia in 1951, Sy spent many years working in the U.S. Army Engineer Research and Development Laboratories at Fort Belvoir, Virginia as a Civil Engineer, where his work focused on the design and testing of military bridges. He also worked at the Pentagon and for FEMA. After retiring from the federal government, Sy transferred his engineering skills to woodcarving, a hobby he started as a teenager. He specialized in carving folk musicians, Jewish religious figures, carousel horses, wood mosaics, and life-like items of clothing. He received recognition in national and local juried art exhibitions and gallery shows, often alongside the watercolor paintings of his wife, and was active for many years with the Northern Virginia Carvers, the Art League (Alexandria, VA), Springfield Art Guild, and the American Wood Carvers Association. In addition to woodcarving, Sy was a passionate philatelist and deltiologist, specializing in collecting stamps and picture postcards of the Danish West Indies and the U.S. Virgin Islands, and wrote historical manuscripts of John Nathaniel Lightbourn. Sy and Judy traveled all over the world together. Favorite memories included Germany, Italy, Greece, and the rocky coast of Maine. His residence for the last several years has been at Greenspring Village in Springfield, Virginia, where he happily continued his woodcarving. Donations in memory of Seymour Wengrovitz can be made to Agudas Achim Congregation in Alexandria VA (mail to: Agudas Achim Congregation, 2908 Valley Drive, Alexandria, VA 22302) and the Springfield Art Guild (mail to: Lydia Jechorek, Attn: SAG, 5608 Doolittle Street, Burke, VA 22015).

Seymour Wengrovitz, 92, of Springfield, Virginia, passed away on April 16, 2021. He was predeceased by his wife of 66 years, Judith Kanarick Wengrovitz (1931-2018), and his brother Paul Wengrovitz. He is survived by his three sons, Michael (Debbie),... View Obituary & Service Information

The family of Seymour Wengrovitz created this Life Tributes page to make it easy to share your memories.