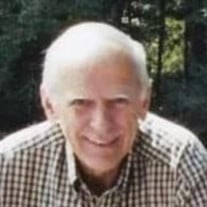 Sam Kotzmoyer Jr. May 16, 1935 – September 13, 2020 who resided at Arden Courts of Fair Oaks, Assisted Living in Fairfax, Virginia was a loving husband, father, and family man that also touched many people along the way by his many acts of kindness. He is preceded in death by his wife, Shirley Kotzmoyer; his son, Steven Kotzmoyer; granddaughter, Jessica Kotzmoyer; sister, Adrianne Peiper; mother, Mildred Kotzmoyer; father, Samuel Kotzmoyer Sr., (US Navy Seal). Surviving is his daughter, Sharon Prisaznick (Mark); granddaughter, Amanda Pine (Alec); grandson, Kyle Markham; great-grandson, Max Pine and brother’s-in-law, Ray Dunham (Julie) and Brent Davis. Sam was born in Pennsylvania and went on to join the United States Air Force where he used his natural cooking talents as a professional chef. He attended Cook School training with the military in New York for several months. Sam was stationed in Japan for 92 days. His next assignment was at DOW AF Base in 1952 near Bangor, Maine for 3 years. It was there he met the “love of his life,” Shirley Dunham. After wedding, they moved to Washington, D.C. to the next assignment. To provide stability for his family, Sam worked at many United States Air Force Bases in the metropolitan area. They were Bowling, Andrews, Fort Myer and the Pentagon. He had duties for 6 months or up to 1 year in Alaska and Puerto Rico. Sam liked working at the Pentagon in the Joint Chiefs of Staff, #1 Mess Hall and eventually retired in 1972. He was an USAF Master Sergeant at the Pentagon with multiple ribbons and awards for his outstanding, professional customer service, plus his unique gift for the most creative/artful presentations with food. He worked for many higher-level Generals, management and served the President at the time, Dwight Eisenhower. Sam received a Medal for Military Merit while at the Pentagon. After his retirement, Sam worked at several long-term food service jobs, all to provide for his wife and family. That was always uppermost- to care for his loved ones. Sam was a bowling enthusiast. His love for the game took him on tournaments as well as regular leagues throughout the week. He won a Gold Pin Award from the USBC Nation’s Capital Area Association for high games (online) and awarded recognition for the most 300 games with an impressive ruby ring. There were also badges and paper award recognitions that he received. Sam was a man of his word; had a generous heart and soul and had his priorities straight. His wife, Shirley was his top priority and so was his children, grandchildren and other family, friends, bowling buddies/team members and coworkers. He will be greatly missed, but his spunky spirit and the drive to succeed lives on in all that knew him. A Graveside service with Military honors will be held at Quantico National Cemetery, Wednesday, September 23, 2020 at 1:30 PM.

Sam Kotzmoyer Jr. May 16, 1935 &#8211; September 13, 2020 who resided at Arden Courts of Fair Oaks, Assisted Living in Fairfax, Virginia was a loving husband, father, and family man that also touched many people along the way by his many acts... View Obituary & Service Information

The family of Samuel C. Kotzmoyer Jr. created this Life Tributes page to make it easy to share your memories.

Send flowers to the Kotzmoyer family.