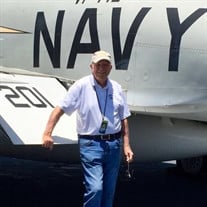 On November 3rd, S. Peter Huhn, a bright star, left our field of vision. Peter was beloved by many and we are left wondering, “Who was that charming man?” Peter was born in Philadelphia in 1932, graduated from the Haverford School in Haverford, PA in 1952 and Dartmouth College in 1956 where he roomed with his high school buddies and excelled at sports. After college his path seemed predetermined since childhood and he entered the Navy. He became a Naval Aviator with tours on many aircraft carriers including the USS Midway where he took command of squadron 155 and served two tours in Vietnam. Captain Huhn retired after 30 years having completed over 10,000 flight hours and 800 carrier landings. His awards include the Bronze Star and six Strike Flight Air Medals. Following his Naval career he spent 13 years with the Navy League as the Director of Legislative Affairs. He continued to talk with his hands in true pilot fashion for many years after retirement. He spent his retirement years hitting tennis and golf balls, and walking his well loved dogs…Philly, Maizy and Caddy. He even tried a bit of oyster farming but he found his passion in golf and was the President of the Fort Belvoir Retired Mens Golf Group for many years. He developed wonderful friendships. He is survived by his devoted wife of 24 years, Channing Brown Huhn, his daughters Sally Huhn (Rafa Orellana) of Rivas, Spain, Jenna Huhn (fiance Wes Eppard) of Naples, FL, his sons Peter Huhn (Susan) of Temecula, CA , Joe Huhn (Lori) of Orinda, CA. He took much pride in his grandchildren Elisa and David Orellana, Matthew, Kristen and Andrew Huhn, Jake and Scott Huhn. His loss is also felt by his step sons Jack Crutchfield (Christina), Paul Crutchfield (Celeste) and step grand children Annabelle, Georgia, Ellie and Abby. There will be a memorial gathering in Alexandria on November 17th with burial at Arlington in the Spring. For more information please contact [email protected] Memorial contributions may be made to St. Jude Childrens Research Center, I.D.# 11796467. Watch over us Peter…. CAVU Clearance and Visibility Unlimited

On November 3rd, S. Peter Huhn, a bright star, left our field of vision. Peter was beloved by many and we are left wondering, &#8220;Who was that charming man?&#8221; Peter was born in Philadelphia in 1932, graduated from the Haverford School... View Obituary & Service Information

The family of Samuel Peter Huhn created this Life Tributes page to make it easy to share your memories.

Send flowers to the Huhn family.