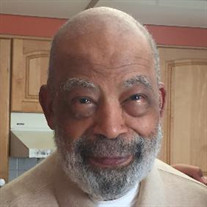 Samuel Morris Cooper was the youngest of eight children born to the late Reverend David Van Cooper, Sr. and Evella Wiggins Cooper. He sought peace and solace the night of Friday, January 3, 2020. Affectionately known to all as Uncle Sam, he was born on July 16, 1934 in Greenville, SC. He spent his childhood there before moving to upstate Pennsylvania, followed by Philadelphia. During his teens, he attended the prestigious United States Military Academy (West Point) Preparatory School, then returned to Philadelphia and graduated from one of the top schools in the country at the time, Central High School. Afterwards, he entered Temple University and majored in English with a Math minor, graduating with a Bachelor of Arts. Uncle Sam had a wide and varied career path which began with his service in the United States Air Force during the Korean War. After an honorable discharge, he taught English and Math at Woodstown HS in New Jersey. He was the first African-American teacher hired in the school’s history and endured significant racism while teaching there. He left Woodstown HS and became the first black manager at Penn Mutual Life Insurance where he again, endured the racism of co-workers and subordinates. The racism Uncle Sam experienced as a child in the Jim Crow south and as a young professional in and around Philadelphia had a profound effect on him and the choices he made in his life. He eventually left Penn Mutual and settled into a new profession, computer science. Here, he found a niche where he could remain involved in the field of education he so loved, while developing new and needed technological infrastructures at top universities; beginning with Princeton, followed by alma mater Temple, and finally The George Washington University where he finished his career as Assistant Director of the Computer Center. In his free time, Uncle Sam enjoyed interesting foods, John le Carré spy novels, classic Hollywood films, chess, photography, and music. He loved jazz most of all. Some of his favorites include Duke Ellington, Oscar Peterson, and Don Shirley. He recorded and edited his own personal radio shows on his reel-to-reels during his pipe-smoking, leather sportscoat, turtle-neck wearing, Alfa Romeo driving days. Uncle Sam was an avid sports fan and loved the Temple Owls, Philadelphia 76ers, Eagles and Phillies. He coached basketball when he was in the military, and supported the women’s tennis and basketball programs while at GWU. He loved squash, racquetball, tennis and loved to go to the racetrack and bet on horses. More than anything, our Uncle Sam loved to learn and loved to laugh. He was a kind, generous and brilliant man whose life and deeds has been as inspiring as the twinkle in his eyes. He is survived by: Lisa Keeler, Jeanne Cooper, Daniel Cooper, Kezia McAllister, Jillian (Corey) Coleman, Erica (Ryan) Alexander, Iya Cooper, Ozu Woodroffe, Kiko Woodroffe, Elma Ruth Dixon, McNewton Sullivan, Jr. (June), Julia Hall, Phillippia Turner, David V. Cooper, III (Arnetta), and a host of nieces, nephews, relatives and friends. Funeral services to be held Saturday, January 11, 2020 at the Jefferson Funeral Chapel, 5755 Castlewellan Drive, Alexandria, VA. Viewing from 12 – 1 pm. Funeral Service from 1 – 2 pm. The Family

Samuel Morris Cooper was the youngest of eight children born to the late Reverend David Van Cooper, Sr. and Evella Wiggins Cooper. He sought peace and solace the night of Friday, January 3, 2020. Affectionately known to all as Uncle Sam, he... View Obituary & Service Information

The family of Samuel Morris Cooper created this Life Tributes page to make it easy to share your memories.

Samuel Morris Cooper was the youngest of eight children born...