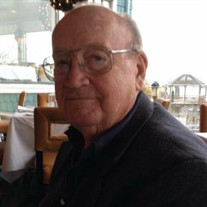 Roy Thomas Starry, Jr. “Jack” (Age 83) Was born on August 21st, 1938 in Alexandria, Va to Roy Thomas Starry, Sr and Myrtle C. (Ridgeway) Starry. He was preceded in death by his loving parents and his second wife. He lived in the Stratford Landing area of Alexandria, VA and had a home on Cedar Creek in Maurertown, VA. Roy passed away at his daughters home in Maurertown, VA. He is survived by his three children, Melissa Ann Breen of Alexandria, VA, Christine Anne Souders (Randy) of Maurertown, VA, and Jack Thomas Starry Sr. of Boyce, VA. His six grandchildren, David Douglas Breen, Jr., Christopher James Breen, Jessica Deanna Souders, Kenneth Cody Souders, Jack Thomas Starry, Jr., and Kyle Laburne Lam. Roy had six great grandchildren and one on the way. Scarlett Shea Breen, Rian Gregory Breen, Lorelai Bailey Breen , Elias Bohdi Breen, Elizabeth Ann Souders, Riddick James Souders, and a Souders baby on the way. Roy was born and raised in Alexandria, VA where he graduated from Mount Vernon High School. After high school he joined the Naval Reserves. He was a long time banker with the Alexandria National Bank. He made a career change and went into a business partnership with his father owning and operating Alexandria Seafood and Poultry in the Del Ray section of Alexandria. Later in life he sold the business to Metropolitan Meat Seafood and Poultry where he continued to work as a buyer for them for 23 years prior to his retirement. He was a longtime, active member and past president of the Belle Haven Country Club in Alexandria, VA where he was an avid golfer. He Loved traveling the world and said one of his favorite trips was to Prague, the Capital City of the Czech Republic, the city where the Starry family originated. He was a kind and giving soul. He enjoyed an active social life with friends having dinner weekly with the ROMEO’s (Really Old Men Eating Out) and he also enjoyed his evening cocktail of Jack Daniels on the rocks. Relatives and friends may call on Friday, January 28th from 12-1pm at Jefferson Funeral Chapel (5755 Castlewellan Dr, Alexandria, VA, 22315) with a service at 1pm, followed by a burial at Mount Comfort Cemetery. In lieu of flowers donations can be made to Blue Ridge Hospice of Winchester Virginia.

The family of Roy Thomas Starry Jr. created this Life Tributes page to make it easy to share your memories.

Send flowers to the Starry family.