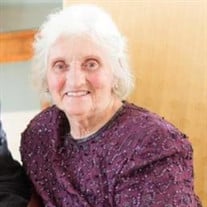 Rosemary Manning Graniewski was born on May 5, 1934 in Holyoke, Massachusetts to Kathryn and Christopher Manning into a loving Irish family. She attended the University of Massachusetts, graduating with a bachelor of science degree in Chemistry. She then moved to Washington DC to work professionally for the US Patent and Trademark office as Patent Examiner. She met her husband of almost 60 years, Gene Graniewski through a Catholic professionals club and realized they both worked for the same agency. They were married in May 1961 in Massachusetts. Thirteen months later, they had twin daughters, Ceil and Terri -- to be followed 4 years later by another daughter, Laura. Rosemary and Gene lived in Alexandria for over 50 years enjoying the company of many long term neighbors and regularly walking on the bike path along the GW parkway. Rosemary was active in her Catholic Church, her daughters’ school, local women’s clubs and traveling. She was particularly proud of volunteering at the White House during the Reagan and Bush administrations working for the First Ladies. The family also enjoyed a vacation home in Bethany Beach, DE since the mid-1960’s. In their later years, Rosemary and Gene moved into the Greenspring Retirement community where they were active in the Catholic community and continued to enjoy long walks daily. Throughout her later years, Rosemary enjoyed spending time with their 8 grandchildren and in recent years, two great-grandsons. Rosemary is survived by: her loving husband of 59.75 years, Eugene; her 3 daughters and their husbands, Cecilia and Patrick Delaney, Teresa and James Hunter, Laura and Seth Herz; 8 grandchildren, Colleen (Delaney) Smith, Ryan Delaney, Kyle Delaney, Connor Delaney, Erin Hunter, Sydney Hunter, Max Herz and Kate Herz; and 2 great-grandchildren: Brayden and Cooper. In lieu of flowers the family requests that donations be made to either the KOVAR (5588 Needleton Ave, Woodbridge, VA 22193) or Alzheimer's Association (www.alzfdn.org).

Rosemary Manning Graniewski was born on May 5, 1934 in Holyoke, Massachusetts to Kathryn and Christopher Manning into a loving Irish family. She attended the University of Massachusetts, graduating with a bachelor of science degree in Chemistry.... View Obituary & Service Information

The family of Rosemary M. Graniewski created this Life Tributes page to make it easy to share your memories.

Send flowers to the Graniewski family.