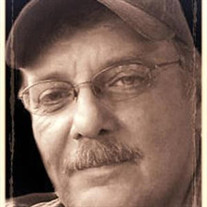 Ronald "Ronnie" G. Dillon passed away on August 2, 2020, surrounded by his family in his home in Alexandria, Virginia. Ron was born on December 26, 1956, in Jacksonville, Florida. During his lifetime, Ron attended school for Architecture, served in the United States Army and Army Reserve as a Surveyor, started several businesses, and worked in the field of construction. Several of Ron's proudest accomplishments include: bowling a perfect game after many, many years of determination, becoming a beloved Granddaddy to his "Baby Doll," and writing and publishing his first novel, Mineko: Book of Sisters. From serenading family with Barry Manilow songs (he had a surprisingly good singing voice) to tinkering on vehicles, Ron had various talents and interests that he dabbled in. He was affectionately called a "Jack of All Trades" and you could always go to him with a question and receive an answer... whether his response was factual or made up on the spot, depended entirely on his whim. Ron was also a staunch (and vocal) supporter that Pluto should remain a planet and no one could convince him otherwise. He was preceded in death by his father, Charles, and mother, Barbara; niece, Chandale. He is survived by his loving wife of 42 years, Donna; daughters, Amanda and Stephanie; granddaughter, Sophia; siblings; Darlene, Roby, Matthew, and Nola. "What greater honor, than when a man moves forward, he leaves behind in each of us the best of what he was." - Unknown Due to the current pandemic, a memorial service will be held at a later time. In lieu of flowers, the family asks that you please consider donating to the American Cancer Society in Ron's name.

Ronald "Ronnie" G. Dillon passed away on August 2, 2020, surrounded by his family in his home in Alexandria, Virginia. Ron was born on December 26, 1956, in Jacksonville, Florida. During his lifetime, Ron attended school for Architecture, served... View Obituary & Service Information

The family of Ronald Gillis Dillon created this Life Tributes page to make it easy to share your memories.

Send flowers to the Dillon family.