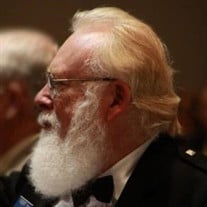 On Tuesday, March 17, 2020, Robert “Bob” Douglas McLaren, beloved husband, father of three, and grandfather of seven, snuck off to meet up with the people he’s been talking about for a good portion of his life, his ancestors. Bob was born on April 24, 1938 in Rockville Centre, New York, to George Albert McLaren and Dorothy Braham (Wood) McLaren. He received his bachelor’s degree from the Polytechnic Institute of Brooklyn, now known as NYU Tandon School of Engineering. His master’s degree was earned through the Air Force Institute of Technology at Wright-Patterson AFB in Ohio. Bob was a Chemical and Nuclear Engineer, serving in the Air Force for 23 years, retiring with the rank of Lieutenant Colonel. Genealogy was a serious “hobby” and so he ran his own business doing just that. He was the Clan Genealogist for both the Clan MacLaren Society of North America and of Scotland, and loved attending conferences all about “the dead folks,” as his wife would say. Some of his known places of employment were the Pentagon, Defense Nuclear Agency, Kaman Sciences, ITT Industries, and Tech Source. We actually can’t tell you all of what he was up to because of his security clearances. Seriously… we really don’t know, and we will probably get in trouble for mentioning this. While stationed in North Dakota at the end of 1965, Bob was set up on a blind date with Bonnie Ebell. He asked her to marry him on their second date (she said “no”), but eventually charmed her into a “yes” by June 1966. They raised three INCREDIBLY AWESOME children, Sean, Mary, and Kathleen. Bob had a passion for Scottish history, genealogy, math, whisky, good food, kilts, good cheese, security clearances, suspenders, local brew pubs, land use, science fiction & fantasy novels, wine from the McLaren Vale in Australia, and the local coffee shop. He was known for his (long) stories, belly laughs, random children mistaking him for Santa (“shhhh! I’m out of uniform!”), wearing his kilt whenever possible, requesting the best Scotch whisky in the establishment, and perhaps slipping into a Scottish accent after a wee dram or two. Bob showed his love for his family and friends by getting involved in their activities and in the community, some of which were: Lee District Land Use, Chief Timer for the Hayfield Farm Swim Team, Neighborhood Watch, and the Hayfield Citizens Association. He attended and cheered on his children and grandchildren at their games, swim meets, concerts, scouts, and more. Bob was preceded in death by his parents, George & Dorothy, as well as two of his younger brothers Richard and William “Billy.” He is survived by his wife Bonnie, his three children and their spouses, Sean & Elke, Mary & Scott, and Kathleen & Mark, his seven grandchildren Kristina, Connor, Reilly, Logan, Emma, Eileen, and Lilian "Lily," his younger brother Gerald “Jerry,” and several nieces, and nephews. Bob will be buried at Arlington National Cemetery Monday, August 31, 2020 at 9 AM. In lieu of flowers, please support Bob’s favorite local businesses, as they will certainly be missing his patronage going forward: Grounded Coffee, Rice and Noodles Thai, Cheesetique, and New Orleans Creole Cafe (in San Diego) or donate to your local genealogical/historical society.

On Tuesday, March 17, 2020, Robert &#8220;Bob&#8221; Douglas McLaren, beloved husband, father of three, and grandfather of seven, snuck off to meet up with the people he&#8217;s been talking about for a good portion of his life, his ancestors. Bob... View Obituary & Service Information

The family of Robert "Bob" Douglas McLaren created this Life Tributes page to make it easy to share your memories.

Send flowers to the McLaren family.