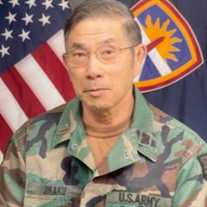 Chief Warrant Officer 5 Robert “Bob” Jikaku, 74, passed away peacefully at his Alexandria, VA home on March 28, 2022. CW5 Jikaku saw combat in the Vietnam War from July 1967 to May 1970, where he was awarded the Bronze Star Medal for “Meritorious Achievement In Ground Operations Against Hostile Forces.” CW5 Jikaku retired from the federal government in October, 2017 with over 50 years of combined military and civilian service. CW5 Jikaku was born on May 6, 1947 in Kaneohe, HI to Edwin and Ida Jikaku. Enlisting in the Army in 1966, CW5 Jikaku served in Vietnam at the rank of Specialist E-6. Continuing to advance professionally after his tours in Vietnam, CW5 Jikaku achieved the rank of Sergeant First Class in 1975 and was appointed as a Reserve Warrant Officer in 1979. In 1980, CW5 Jikaku was awarded the Army Commendation Medal First Oak Leaf Cluster for his contributions to improve and consolidate the management of technical communication resources within his battalion. CW5 Jikaku continued his work in the areas of communications systems and security throughout the remainder of his military career, achieving recognition as an affiliated member of the Army Signal Corps Regiment in 1990. He was honorably discharged from active duty in 2001 and began a second career as a civilian employee of the federal government, retiring in 2017. On his retirement, CW5 Jikaku was awarded the Legion of Merit in recognition of 34 years of honorable service and “exceptionally meritorious conduct in the performance of outstanding services and achievements.” CW5 Jikaku was a dedicated and loyal soldier, as well as a patient and loving father. He married Anna Pak in Clarksville, TN in 1973. He will be remembered as a nature lover and adventurer who shared his love for camping, fishing, running, motorcycles, and the great outdoors with his children and grandchildren. He once rode his Harley Davidson motorcycle coast to coast across the USA. He also enjoyed participating in the annual “Rolling Thunder” veterans’ ride around Washington, DC. At home he was known as “Mr. Fix-it All” with an uncanny ability to repair any appliance, vehicle, or household problem. CW5 Jikaku was an active member of his community, a member of the American Legion, who volunteered at local polling places and schools, and served in the catholic church as a eucharistic minister and pastoral councilor. His academic achievements included the following: • Warrant Officer Senior Staff Course 1998 • Eastern Michigan University, Master of Liberal Studies, Information Security, 1997 • Park College, Bachelor of Arts, Management, 1981 • University of New York, Associate in Arts, 1976 CW5 Jikaku is survived by his wife Anna, his siblings Diane, Dalphine, Michael and Dennis, his daughters, Mary, Josephine and Jamie; his five grandchildren, and his three great-grandchildren. In lieu of flowers, memorial contributions may be made to Gary Sinise Foundation at www.garysinisefoundation.org/donate.

The family of Robert N. Jikaku created this Life Tributes page to make it easy to share your memories.

Send flowers to the Jikaku family.