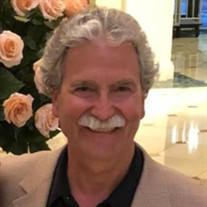 Robert Bruce Hughes (69) Robert (Bob) Bruce Hughes, age 69, of Alexandria, Virginia died suddenly on March 29th, 2020 at Fairfax Hospital in Falls Church, Virginia. The oldest of four children of the late Robert and Betty Hughes of Titusville, Florida, Bob was born in Springfield, Illinois on March 14th, 1951. Bob is survived by his wife of 32 years, Laurie Graner Hughes; his sons Benjamin Hughes and Christopher Hughes; his three siblings, James (Jean) Hughes, Kathy (Robert) Bross and Nancy (Michael) Patskoski; nieces and nephews, Justin Hughes, Elizabeth Bross, Neil (Jessica) Bross, Tammy (Brendan) Franklin, Matthew Lare, Michelle Golden (great nephew Jackson and great niece Lexa), Theresa Graner and Jonathan Graner; sisters-in-law Jeanne (Donald) Tulp and Garran Graner. Bob grew up in a proud Air Force family and was fortunate to live in many places across the U.S. and in France and Germany during his younger years. He attended St. Stanislaus High School in Bay St. Louis, Mississippi and received his BBA from University of Mississippi (Ole Miss) in Oxford, Mississippi. Bob moved to the Washington, D.C. area in 1976 where he started his career in accounting. He worked for many years in support of charitable and nonprofit organizations like Common Cause and American Health Planning Association, where he and Laurie met. He later became Controller of The Funding Center and SOC Enterprises. Later in his career, Bob was Controller for the law firm, Quinn, Racusin and Gazzola. For more than 20 years, Bob was an active member of the Institute of Management Accountants (IMA) and because of his close ties to Mississippi delegation staff members, he enjoyed playing softball with a Capitol Hill team called the Mississippi Mudcats. Bob was a dedicated father and avid volunteer and was privileged to spend many years doing both on a full-time basis. He drove the boys and their friends to soccer practice and games, swim meets, and other sporting events. He valued his role as a soccer coach to his son Christopher. In addition, he was a long-time member, volunteer timer and Treasurer of the Highland Park Swim Club where his sons both swam competitively during the summers. Bob was also intimately involved in his boys’ scouting lives and attended their meetings, volunteered for all of their camping trips, and supported them both in achieving the rank of Eagle Scout. Bob enjoyed traveling and live music events, so he and his family often combined the two passions when vacationing. Most of all, Bob loved the beach and could not wait until the day when he could just go fishing for hours on end. He was a bird watcher, lover of nature and an avid fútbol fan, just recently becoming a member of the Washington, D.C. FC Barcelona Penya. For the past 10 years, Bob volunteered his time in finance and accounting for the Bush Hill Presbyterian Church in Alexandria, VA. A Memorial Service and Celebration of Life will be announced at a later time when family and friends can come together in honor of Bob. In lieu of flowers, contributions may be made in Bob’s name to Bush Hill Presbyterian Church, INOVA Health Foundation, World Wildlife Fund or the charity of your choosing. “It's something unpredictable, but in the end it's right. I hope you had the time of your life.” - Green Day

The family of Robert Bruce Hughes created this Life Tributes page to make it easy to share your memories.