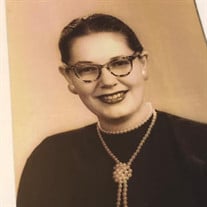 Rita Mae Weinberger died in hospice at age 93 on Wednesday, December 1st, 2021 from natural causes. Rita Mae or Aunt Mae, as she was referred to by the family, was born April 23, 1928 in Donora, Pennsylvania. She was proud to say that her birthday was the exact month, day, and year of Shirley Temple (child star). Rita Mae had two older brothers, Sidney and Alvin Weinberger. Her mother, Margaret (Malvin) Welkovics came as a young bride from Czechoslovakia to the United States to marry Phillip Weinberger, who came to the United States earlier. After graduating high school, Rita Mae’s mother and she moved to Arlington, Virginia. Eventually, they were one of the first residents of the new Crystal City apartments. Rita remained there for over 40 years and saw many changes to the Northern Virginia area. After studying secretarial skills, she decided to apply and work for the United States Government in the Department of Housing and Urban Development (HEW) in the 1960’s. Her strong leadership and special talents for problem solving were recognized by her office administrator. As a result of her hard work, she was offered a job as a computer programmer which was very uncommon for women at the time. Rita Mae was a part of this new groundbreaking field. She later became and administrator and had a very successful career and retired in the mid-1980’s. Rita’s passion for reading books of time travel and period pieces led her to a love of travel. She visited many countries, especially in Asia. She loved Hong Kong and later travelled to Ireland and England. She considered herself an “Anglophile”- a person who greatly admires England and especially, Queen Elizabeth. Rita Mae is survived by her nieces Susan (Ken), Paula (Mark), and Gayle Petro (Jim). Rita is also survived by her great nephews; Mike, Nate, and Keith (Sara) great niece, Allison (Sarhar), great-great nephews, Eli and Charlie, and great-great niece, Olivia. A graveside service will be held at King David Memorial Gardens (Hollywood Rd, Falls Church, Virginia) on Sunday, December 5th, 2021 at 3:00PM. Arrangements were made by Jefferson Funeral Chapel in Alexandria, Virginia. Since Rita had many family members die in during the Holocaust, the family requests that lieu of flowers, a donation be made to the United States Holocaust Museum (ushmm.org) in her honor. A heartfelt thank-you goes to Martin Brown, the executive director of the “Tribute as the Glen Assisted Living”, for the wonderful care he and his community gave to Rita Mae while living there. The book “Under the Lilacs” by Louisa May Alcott was a favorite book that Rita Mae read many times in her childhood. Here is a quote By Louisa May Alcott that best describes how Rita Mae lived her life: “I am not afraid of the storms for I am learning how to sail my ship.”

Rita Mae Weinberger died in hospice at age 93 on Wednesday, December 1st, 2021 from natural causes. Rita Mae or Aunt Mae, as she was referred to by the family, was born April 23, 1928 in Donora, Pennsylvania. She was proud to say that her birthday... View Obituary & Service Information

The family of Rita Mae Weinberger created this Life Tributes page to make it easy to share your memories.