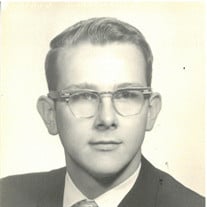 Richard “Rick” James Davis (75) of Springfield, Virginia, passed April 1, 2020. He is the beloved husband of Carol L. (Tingley) Davis; loving father of Jeannette C. Di Giulian (the late James), Eric R. Davis (Janet), and Anna M. Williams. He was preceded in death by his parents Ret. Lt. Col. Glen E. Davis and Laurie E. Davis. He is survived by his brother Glen E. Davis, Jr. (Alice). He is the cherished grandfather of 11: Emily Di Giulian (15), Natalie Di Giulian (15), Jayda Pearson (13), Brandon Davis (13), Julian Williams (12), Isabella Di Giulian (11), Autumn Davis (10), Craig Williams (9), Jazmyn Pearson (9), Ruby Williams (6) and Warren Davis (3). He is also survived by numerous friends and extended family. Rick was born to his parents on November 29, 1944 in Des Moines, Iowa. His military family moved frequently during his upbringing and he cherished the years spent in Germany where the Davis’ have extended family. As a young lad he enjoyed boy scouts and games of strategy. Upon return to the United States, Rick’s family planted themselves in Springfield where he ultimately graduated from Lee High School—but not before meeting his sweetheart of 53 years. He continued his education at The Virginia Military Institute where he took the nickname “Bear” and graduated in 1967. He then married his high school sweetheart Carol at Olivet Episcopal Church and joined the Air Force beginning his career as a computer systems analyst. The Air Force sent him to graduate school at Georgia Tech. Following his service Rick worked for the General Service Administration where he retired. Never one to be idle, he continued working as a contractor for various corporations until his grandchildren came along and he became an “Opa”. Rick was an avid collector of various things throughout his life to include stamps, tools, cars, coins, hats, knives, and guns. He loved soccer and played until his knees couldn’t’ take it. Later in life he was a dedicated coach for the Springfield Youth Club and even led one of his granddaughter’s teams to a championship. He enjoyed canoeing and working in his extensive vegetable and flower garden. He was a skilled wood crafter and spent much of his adult life as The Village Toysmith selling his creations at craft fairs. He ultimately took up whittling and created a house full of hand-crafted birds. He spent a lot of time in his rocking chair in his wood shop perfecting his skill. Rick enjoyed traveling with Carol and top-down rides in his convertibles, hosting family barbeques, and a good scotch whisky. He frequented as many Oktoberfest activities as time would allow and would sport his kilt or lederhosen. Always a family man, Rick organized many yearly vacations with his children, their spouses and ultimately grandchildren in attendance. Opa will be sorely missed by those who know and love him. A private family viewing will be held at Jefferson Memorial Chapel in Alexandria, Virginia. A Memorial Service will be held at The American Legion Post 76, 6520 Amherst Ave. Springfield, VA 22150, on Friday, October 15, 2021 at 8:30AM. Inurnment directly following at Quantico National Cemetery Triangle, VA. In lieu of flowers, if you are inclined, please make a donation to: Food for Others https://donatenow.networkforgood.org/foodforothers?code=website American Legion Post 176 https://www.members.legion.org/tal/donatenow#legion-org

The family of Richard James Davis created this Life Tributes page to make it easy to share your memories.