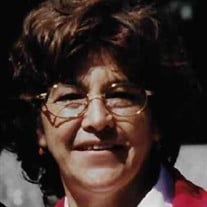 Amparo was born in Guatemala City, Zona 6. She sold newspapers, gum and lottery tickets in the streets as a young child and began working as a maid at the age of ten. She attended night school and completed the sixth grade at the age of 16. In 1969, when she was 22, Amparo emigrated to Newark, seeking a better life and greater opportunity to financially support her family. There she found, lived and worked with a close-knit community of Guatemaltecos. Soon thereafter she met and developed lifetime friendships with neighbors and other folks in her community. For decades, Amparo worked as an assembly line worker and a machine operator at various manufacturing factories in and around Newark. She was a strong single mother to a son and two daughters and helped to raise two nephews. Their success and achievements were her greatest concern and pride and are her greatest legacy. She supported many others, including helping over a dozen family members emigrate to the United States. In 1996, she became a citizen and was always proud in exercising her right to vote. Animals, especially dogs and birds, also found love, shelter and care in Amparo’s heart. She enjoyed reading autobiographies, dreamed of travelling more, loved to cook her specialties for family and friends, took great pride in caring for and keeping her surroundings clean, and had an infectious laughter that will be impossible to forget. Her life demanded toughness, but she remained softhearted and expressed great tenderness, especially towards the end. After nearly forty years of living in Newark, she retired in 2008 and moved to San Antonio to live near her oldest daughter and her family. In 2017, she moved to Lorton, VA to live with her youngest daughter and her family. For nearly thirty years, Amparo struggled with interstitial lung disease and pulmonary fibrosis before succumbing to COVID-19. She received her last rites on Feb. 6. The next day, her final one on this earth, Amparo was surrounded by her children when she was welcomed and entered peacefully into God’s kingdom. Her family is grateful for the care and comfort she received from dedicated and compassionate staff during her two-week hospital stay at Inova Hospital in Fairfax, Virginia. Amparo was preceded in death by her parents, Maria Luz Rodas and Ricardo Garcia Pelaez, and seven siblings. She is loved and will be missed by her daughters, Marisol Montero-Butler and Sonia Montero Poyo, her son, Jorge Marroquin, sons-in-law Aaron Butler and Noel Poyo, daughter-in-law Rachel Marroquin, nephews, Jorge and Edwin Garcia, and nine (9) grandchildren, Daniel, Joseph and Sarah Marroquin, Nalani and Leila Butler, Marco Antonio Montero, and Isabella, Gabriela, and Alexandra Poyo. In keeping with her wishes, her children and grandchildren will gather privately to celebrate her life and spread her ashes. The family requests that, in lieu of flowers, any memorials be made in the form of donations to Food for the Poor or the ASPCA.

Amparo was born in Guatemala City, Zona 6. She sold newspapers, gum and lottery tickets in the streets as a young child and began working as a maid at the age of ten. She attended night school and completed the sixth grade at the age of 16.... View Obituary & Service Information

The family of Reyna Amparo Garcia created this Life Tributes page to make it easy to share your memories.

Amparo was born in Guatemala City, Zona 6. She sold newspapers,...