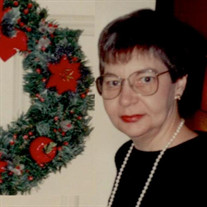 Reba was born in Harrisburg, Pennsylvania, the daughter of the late A. Franklin and Reba Herrmann. She graduated, in 1957, from William Penn High School where she was active in the orchestra, playing the string bass while her future husband, Ray, served as concertmaster at first violin. Ray remembers spending much of his time staring at Reba from the opposite side of the ensemble. After graduating, Reba played in the Harrisburg Symphony Orchestra while Ray was stationed in Japan with the US Air Force. Reba and Ray married on January 6, 1962 and moved to Atlantic City, NJ where Ray worked as an air traffic controller. A year later, Ray transferred to Washington National Airport and the couple put down roots in Alexandria. Their son, Richard, was born in 1964, followed by his younger brother, David, three years later. Shortly after arriving in the area, Reba and Ray joined Gloria Dei Lutheran Church which, at the time, was meeting in the auditorium of Patrick Henry Elementary School on Taney Ave. Reba and Ray were instrumental in the financing and construction of the church building across the street and remained with Gloria Dei until it closed in the early 1970’s. The humble building, now housing the St. Martin de Porres Senior Center, remains a symbol of their determination to provide a physical structure for the congregation to worship in and continues to serve the community more than 60 years later. Reba and Ray transferred to Advent Lutheran Church in Arlington where Reba served on several committees and assisted with Sunday School and catechism classes. Among her students was future daughter-in-law, Marianne. The whole family participated in Boy Scouts; Reba served as a Cub Scout Den Leader and Coach for several years. Reba was also very active in the PTAs at Jefferson-Houston and William Ramsay Elementary Schools. In the mid-70’s, Reba joined the Finance Directorate at Institute for Defense Analyses and retired in 1999. Reba and Ray made the most of retirement, travelling to Alaska, Hawaii, Germany, Panama and all over the US. They also arranged domestic and international trips for their local AARP Chapter, Aldersgate United Methodist Church and neighboring friends. Closer to home, Reba and Ray devoted extraordinary time and energy volunteering at Mount Vernon – George Washington’s Estate, where Reba contributed over 4000 hours of service. Reba and Ray also shared a love of listening to good music. They regularly attended Marine and Army band concerts as well as musical events of all types. Residents at Goodwin House Alexandria since 2013, they were a dynamic duo, nearly always side-by-side, enjoying adventures and helping others. Arrangements are being handled by Jefferson Funeral Chapel in Alexandria. Private interment at Ivy Hill Cemetery in Alexandria. A memorial service will be held at a later date. In lieu of flowers, the family requests donations be made to George Washington’s Mount Vernon in Reba’s name.

Reba was born in Harrisburg, Pennsylvania, the daughter of the late A. Franklin and Reba Herrmann. She graduated, in 1957, from William Penn High School where she was active in the orchestra, playing the string bass while her future husband,... View Obituary & Service Information

The family of Reba L. Hawn created this Life Tributes page to make it easy to share your memories.

Reba was born in Harrisburg, Pennsylvania, the daughter of the...