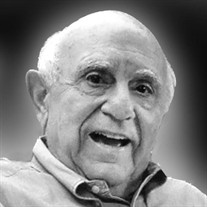 Raymond Galant, 91, of Boca Raton, Florida, died on Wednesday, January 27, from complications of Covid-19. He was a journalist, veteran, sports fan, horse-racing enthusiast and rancounteur. Galant and his college sweetheart, the former Shirley Gable, settled in the Washington, D.C. area after his discharge from the Army in 1953. He worked a series of reporting and public relations jobs, and in 1961 joined the late Louis Rothschild, Jr., to publish Food Chemical News, a newsletter that grew into a leading source on food regulation and safety. As a journalist, he fought vociferously for enforcement of the Federal Open Meetings Act and was a longtime member of the National Press Club and the Society of Professional Journalists. Raymond Galant was born to immigrant parents in Mahanoy City, Pa, where he lived over his parents’ clothing store and liked to say he grew up in the local pool hall. He was the first member of his family to attend college, getting a journalism degree at Penn State, where he later endowed a scholarship for communications students from Schuylkill County, Pa. The Galants raised three children in the Virginia suburbs, where he was an active member of Temple Rodef Shalom. In addition to northern Virginia and Boca Raton, where they retired, the couple also spent time in Manasquan and Livingston NJ. Galant was a long-suffering Chicago Cubs fan and a member of the Emil Verban Society, a Washington-based club of Cubs’ superfans. In 1988, when Media General announced it was dropping Chicago’s WGN, which carried the team’s games, Galant organized a protest group that got the decision reversed. Galant is survived by Shirley, his wife of 67 years, his children -- Debbie Galant of Clifton, N.J., Mark Galant of Vero Beach, Fla. and Ellen Galant of Vienna, Va. -- plus four granchildren, Margot and Noah Levinson and Kendall and Tyler Galant. The family asks that, in lieu of flowers, donations be made to the Alzheimer’s Association and the Boca Raton Regional Hospital Foundation.

The family of Raymond Galant created this Life Tributes page to make it easy to share your memories.