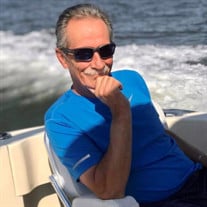 Perry Lamar Wilcox, Jr. Perry “Willie” Lamar Wilcox, Jr., loving husband, father, brother, uncle, and friend passed away in his home on Thursday, October 1, 2020 at the age of 68. He was surrounded by his adoring wife and children. Those left to treasure his memory include his wife of 30 years, Rosemary Wilcox, and his four children, daughter, Jessica (husband, Jose); son Christopher (wife, Christy); son, JP (wife, Abigail) and daughter, Erin. He was survived by his sister, Debbie and is preceded in death by his father, Perry, his mother, Nancy and his two sisters, Linda and Sharon. Upon high school graduation from Charlotte Hall in Maryland, Willie entered the Marines in 1970. He earned the rank of Corporal during his four years as a Marine Corp Rifleman and was awarded the National Defense Service Medal for his service during the Vietnam War. While in the Marines, Willie met his first wife, Mary Christine Holien. Together, they had daughter, Jessica and son, JP. When his time with the military came to an end, he chose to embark on a career at Washington Gas. While there, Willie met his best friend and the love of his life, Rosemary. They were married in 1990 and made their home in Springfield, Virginia. During his 31 years at Washington Gas, Willie worked his way from the Survey Department to Department Head of Business Development. His remaining years of work were spent with ColonialWebb, serving in the role of Sales Manager. He was a remarkable athlete and loved nothing more than spending weekends on the softball fields with teammates who would turn in to lifelong friends. Several of his friends and teammates from Washington Gas also embarked on an annual golf trip together. In addition to his softball and golf prowess, he was an avid bowler who bowled for over 30 years in the Washington Gas bowling league at Bowl America, Edsall Road. Having lost a sister and sister-in-law to the illness, Willie was a 20+ year supporter and contributor to the Leukemia and Lymphoma Society’s Light the Night Walk. He, Rosemary, and his family outraised many of their peers, year after year, in a fight for the cure. Willie was a devoted father who often could be found shuttling his four kids to various endeavors throughout their youth and eventually cheering them on from the sidelines as they grew older and excelled in their own sports. He was a loving grandfather who delighted in nothing more than being a “Poppy” to his eight grandchildren. Katelynn Emily Shaiko (21), Aiden Christopher Shaiko (17), Trey Tomas McEntee (7), Aria Christina Shaiko (7), Graham Taylor Wilcox (7), Perry Mae Wilcox (5), Reid Elizabeth Wilcox (5), and Ella Christiana McEntee (3). The family would like to thank all of those, near and far, who kept his spirits happy with the many cards, visits, and meals. If you prefer to make a donation in lieu of flowers, please consider Capital Caring Hospice or The Leukemia and Lymphoma Society, Washington, DC. Willie’s loved ones are fortunate to have had him in their lives. His legacy will live on through his children and grandchildren and his impact will stay with them, always.

The family of Perry "Willie" L. Wilcox Jr. created this Life Tributes page to make it easy to share your memories.

Send flowers to the Wilcox family.