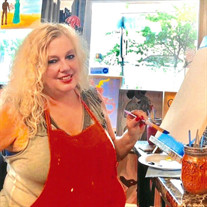 Peggy Christine Wright of Alexandria, Virginia, passed away Wednesday, September 29, 2021. She is survived by her husband, John L. Wright Sr., son, John L. Wright Jr. (Brenda Ventura), grandchildren, Joanna and Joshua, mother, Ursula Justus, and sister Patty Patterson. She is preceded in death by Billy Patterson and Charles K. Patterson. Peggy was born in Stuttgart, Germany on January 29, 1956, to Ursula Justus and Charles Patterson. At the age of 15, she and her family moved to New York City, where she lived for a few years before moving to Virginia. In 1976, Peggy met John Wright Sr. She and John Wright Sr. married in April 1977. Peggy and John Wright Sr. moved to Belgium from 1977 to 1981. In 1981, Peggy and her family moved back to Virginia. Peggy worked as a cashier at Shoppers Food Warehouse for 30 years. She was loved by her shoppers’ family and the customers. People would deliberately go through her checkout line because she was always courteous and friendly. Peggy had a presence about her. Every time she entered the room, she will brighten it up with her smile. Following the closure of Shoppers Food Warehouse, Peggy began working as a cashier at the local Giant. Peggy loved animals, gardening, and decorating. Peggy was a loving mother and grandmother. Her presence will be missed by many. A viewing will be held at Jefferson Funeral Chapel on Tuesday, October 5, 2021, from 4:00 PM to 8:00 PM. A funeral service will be held at Jefferson Funeral Chapel on Wednesday, October 6, 2021, at 11:00 AM, with a reception to follow at noon. The service will be livestreamed for those who cannot attend the service in person. The livestream link can be found on the "Tribute Wall" portion of this webpage. Please view and sign the guestbook.

The family of Peggy Christine Wright created this Life Tributes page to make it easy to share your memories.

Send flowers to the Wright family.