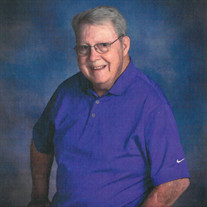 Paul Richard McManimon passed away peacefully on March 8, 2021 at the Charlotte Hall Veterans Home. He was born to William and Charlotte McManimon in LaCrosse, WI on February 25, 1930. Paul grew up in southern Minnesota and served in the Army from 1951 to 1953. In 1952, he married his high school sweetheart, Marjorie Anita Rye at The Mission of San Louis Obispo near where he was stationed in California. Paul and Marge lived an adventurous life and made many friends in the states where they resided which in addition to Minnesota, included California, Colorado, Utah and Maryland. Paul’s career was centered on automotive parts at both dealerships and as a distributor. In the late 1970’s they owned their own automotive parts business in a beautiful little town in the mountains of Colorado, Buena Vista. They enjoyed skiing, snowmobiling, fishing and spending time with family and friends. After their move to St. Leonard, MD in 2001 they became active members of their community. They volunteered at the local hospital, participated in activities at Southern Pines Senior Center, and attended our Lady Star of the Sea Catholic Church. Paul served on the Calvert County Commission on Aging for two terms, volunteered as a driver for Partners In Care, and was a fundraiser for the Alzheimer’s Association. He also worked part-time at Flag Harbor Marine Services and truly enjoyed interacting with all the boaters and fishermen. Paul always had a smile and loved a good joke - up until the very end. He is preceded in death by his loving wife Marjorie, son Frances, his parents, his brother James McManimon, his sister, Sister Frances de Sales McManimon and sister Eleanor Carlson. He is survived by his daughter Teresa Dyer and her husband Curtis Dyer of Alexandria, Virginia, grandson Marshall Dyer (Becca) of South Lake Tahoe, CA, granddaughter Brittany (Gilbert) Dyer of North Fork, CA and many dear cousins, nieces and nephews. In lieu of flowers, the family requests that contributions be made to Calvert Hospice at P.O. Box 838, Price Frederick, MD 20678 or www.calverthospice.org Interment of his and his wife’s ashes, in the Columbarium at Arlington National Cemetery, will occur at a later date.

Paul Richard McManimon passed away peacefully on March 8, 2021 at the Charlotte Hall Veterans Home. He was born to William and Charlotte McManimon in LaCrosse, WI on February 25, 1930. Paul grew up in southern Minnesota and served in the Army... View Obituary & Service Information

The family of Paul Richard McManimon created this Life Tributes page to make it easy to share your memories.