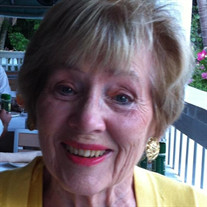 Patricia L. Barnes, 88, passed away on June 12. Born Oct. 11, 1931 in Indiana, she was the daughter of the late Evelyn Cox Wingert and Lewis Francis. Patty was a lifelong teacher. After graduating from her beloved Indiana University, she taught numerous first graders to read in schools in Whittier, Calif., Crawfordsville, Ind., Lubbock, Tex. and at St. Aidan’s in Alexandria, Va. After earning a master’s degree in special education from the College of William and Mary, she moved to teaching students with learning disabilities in Fairborn, Oh. and then at Walt Whitman Middle School in Fairfax County Public Schools for 20 years. She remained in touch with many of her former students who continued to seek her advice. After retirement, she kept on teaching, leading classes on strength training and movement exercises for her friends at the Hollin Hall Senior Center, where she also served on the advisory board and worked in the library. Patty was an enthusiastic sports fan. She was a cheerleader throughout high school and college, and continued to cheer on IU whenever and whoever they played. Other favorites were Arnold Palmer and Tiger Woods, the Redskins and Wizards, and any former IU basketball player in the NBA. Patty’s love of sports was matched by her husband, the late Frank G. Barnes (Maj. Gen, USAF), who died in 1976. In addition to supporting Frank throughout his Air Force career, Patty joined him in attending numerous college and professional sporting events. (Famous in family lore is her attending a football game in Los Angeles a week before giving birth to the couple’s first child.) She maintained her teaching career while also performing the duties expected of an officer’s wife, giving her children an example in multi-tasking before that became a recognized phenomenon. Patty was also an enthusiastic cheerleader of her family. She is survived by three children, Beth Barnes of Lexington, Ky., Susan (Joe) Canfield of Pella, Iowa, and Hank (Connie) Barnes of Morrisville, NC; five grandchildren, Alix and Dan Barnes and Katie, Ally and Maddie Canfield; and numerous nieces and nephews. She was preceded in death by her sister, Penelope Osborne; brother, Phillip Francis; and two nephews. The family thanks Ray Leshynski for the many ways in which he was of help and support to Patty, particularly in helping her to maintain some independence even as her multiple illnesses conspired against her. We also thank the staff at Brandywine Living of Alexandria for providing an engaging environment for Patty the last several years and showing so much compassion at the end. Thanks too to Capital Caring for their invaluable services these last few weeks. Patty will be buried at Arlington National Cemetery when circumstances allow; a celebration of life will be held then as well. Jefferson Funeral Chapel is handling arrangements. For those wishing to make memorial contributions, we suggest the Student Emergency Fund at Indiana University (https://www.myiu.org/one-time-gift?sc=AG21GANIUFO1GNWETF25M), the Parkinson’s Foundation (https://secure3.convio.net/…/SPage…/2017_donate_form_2.html…), or the National Center for Learning Disabilities (https://www.ncld.org/donate/).

Patricia L. Barnes, 88, passed away on June 12. Born Oct. 11, 1931 in Indiana, she was the daughter of the late Evelyn Cox Wingert and Lewis Francis. Patty was a lifelong teacher. After graduating from her beloved Indiana University, she taught... View Obituary & Service Information

The family of Patricia Lynn Barnes created this Life Tributes page to make it easy to share your memories.

Send flowers to the Barnes family.