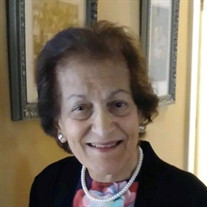 Nawal Azzouz Yaqub Musleh, age 78, of Alexandria, VA passed away peacefully surrounded by her family on Monday, August 17, 2020. Nawal was born in Ramallah, Palestine on October 24, 1941 to Eid and Neimeh Azzouz. In 1962 she married Yaqub (Jack) Nimer Musleh and shortly thereafter, they moved to Kuwait where they spent five years before immigrating to America in 1971. Nawal is predeceased by both her parents; her husband Jack Musleh; her beautiful, beloved son Bassam Musleh; and her three brothers Kamel Azzouz, Kamal Azzouz, and Munir Azzouz. May they reunite in heaven peacefully. Nawal is survived by her three children Ghassan (Tina) Musleh of Richmond, VA, Murvat (Edward) Musa of Lubbock, TX , and Donna Musleh of Alexandria, VA; and by her two sisters Amal Salem and Seham (Isa) Azzouz. Nawal adored her four grandchildren; Sophia Musleh, Sarah Musa, Helaina Musa, and Jake Musa, who will miss her dearly. Nawal was a dedicated wife, mother, daughter, sister, and grandmother. Through her many health issues, she never lost hope and compassion for others. Her unwavering faith in God kept her going, as she truly believed that through our Lord and Savior Jesus Christ, she could overcome any challenges put before her. She never questioned what life had in store for her, and approached every obstacle with grace and strength. Nawal was a kindhearted community member, as you would often find her cooking delicious meals for anyone who needed it. She opened her home to anyone who needed shelter, and always displayed immense empathy toward others. Nawal’s beautiful heart lit up any room she entered, and she instilled these shining qualities in her family. Her children and grandchildren deem her a strong role model who believed in the importance of kindness. Nawal will forever be remembered as a remarkable woman who made the world a better place just by being in it. Everything we are is because of you- we will miss you, Teta. Visitation will be Thursday, August 20, 2020 from 10am-12pm, with funeral service directly after at Saints Peter and Paul Antiochian Orthodox Christian Church, Potomac, MD. Burial to follow at National Memorial Park, Falls Church, VA. Funeral service to be live streamed at https://www.peterpaulpotomac.org/live-stream.html Instead of flowers, the family asks that donations be made to Saints Peter and Paul Antiochian Orthodox Christian Church at 10620 River Road, Potomac, MD 20854.

Nawal Azzouz Yaqub Musleh, age 78, of Alexandria, VA passed away peacefully surrounded by her family on Monday, August 17, 2020. Nawal was born in Ramallah, Palestine on October 24, 1941 to Eid and Neimeh Azzouz. In 1962 she married Yaqub... View Obituary & Service Information

The family of Nawal Azzouz Yaqub Musleh created this Life Tributes page to make it easy to share your memories.

Send flowers to the Musleh family.