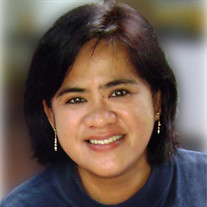 Miriam Santos Forrester was born in Manila, the Philippines, on June 10, 1960. Miriam—or Mie, as she was known to family and friends—was the first child of Jose Rivera Santos, Jr., and Aurelia Catabona Santos and was baptized in the Santo Niño de Pandacan Parish of the Roman Catholic Church. Later she was joined by her oldest sister Helen, her brother Joselito, or Jojo, and her second sister Joanne, the youngest of the siblings. She remained very close to her parents and siblings throughout her life. Together the Santos family grew up in the Pandacan district of Manila and, under the guiding hand of their loving parents, were active in the local community and in the Santo Niño de Pandacan Parish. Miriam attended the Paco Catholic School in Manila and later received her bachelor’s degree in accounting from the University of the East in Manila. After college, Miriam worked in finance for several years in Manila, including for Telefunken Microelectronics, where she was proud to have been recognized one year as the Best Muse of the Manila office. A major turning point in her life was opportunity to move to Saipan of the Commonwealth of the Northern Mariana Islands, a U.S. territory, to work with her father. Eventually her mother and siblings Joanne and Jojo were able to move to Saipan as well and settle with their families, becoming U.S. citizens in the process. Miriam lived with her family and worked in Saipan for twenty years, doing accounting and other managerial work for Micronesian Brokers, Inc., where she made many fast friends. In 2006, Miriam met her husband Nathan, or Nate, and moved to northern Virginia to be with him. They were married in St. Louis Catholic Church on June 9, 2007. Miriam later became a Finance Officer for the Rule of the Law Initiative of the American Bar Association in Washington, D.C., while Nate worked at the Office of Legal Counsel of the U.S. Department of Justice in Washington, D.C. Miriam was active in the lives of Nate’s daughter Sophia and his sister Rebecca and brother-in-law Doug, who for a long period of time lived right next door with their four children. Nate, Miriam, Sophia, and Sophia’s cousins enjoyed many fun outings together on the weekends. Miriam went to be with the Lord on January 29, 2021. She is survived by her mother Aurelia, her sisters Helen and Joanne, her brother Jojo, her husband Nate, her step-daughter Sophia, and numerous cousins, nephews, and nieces on both sides of the family—all of whom were near and dear to her. For her entire life Miriam made a daily habit of speaking to her family wherever they were in the world. She is much loved and much missed. In lieu of flowers, memorial contributions may be made to Little Workers of the Sacred Heart. Checks may be made payable to: Little Workers of the Sacred Heart and sent to the care of Sister Deirdre Byrne, 3620 15th St., N.E., Washington, DC, 20017.

Miriam Santos Forrester was born in Manila, the Philippines, on June 10, 1960. Miriam&#8212;or Mie, as she was known to family and friends&#8212;was the first child of Jose Rivera Santos, Jr., and Aurelia Catabona Santos and was baptized in... View Obituary & Service Information

The family of Miriam Santos Forrester created this Life Tributes page to make it easy to share your memories.

Miriam Santos Forrester was born in Manila, the Philippines,...

Send flowers to the Forrester family.