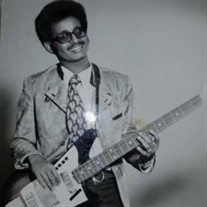 Melake Gebre of Mendefera, Eritrea laid his captivating eyes to rest on December 1st, 2020. Melake had a long fight with cancer and finally went home to be with our Lord and Savior. Melake Gebre, Son of Gebre Yohannes and Dahab Gebre was born on September 26, 1949 in Mendefera, Eritrea. Melake attended St. George school until he was recruited for his academic achievements to attend Prince Bede Mariam Lab School (located on the Addis Ababa University campus). In the 1970’s, Melake and his friends created a jazz funk band named, “’The Walias Band.” They were the house band for the upscale Hilton Hotel in Addis Ababa. Melake was the bass guitarist and played with passion and soul. In 1981, Walias Band became the first modern Ethiopian band to travel to the United States. Melake, alongside his band members, went on to perform with one of the greats, Mahmoud Ahmed, and were popular influencers in the music industry. Rather than going back to Ethiopia, the group decided to stay in Washington DC and continued to bless people with their melodic instrumentals. Melake was not only a gifted musician, but also a phenomenal businessman. He owned many businesses throughout his life including the popular “MG Nightclub” in Addis Ababa and “Ethio Music Sound,” a recording studio. Melake received his Bachelors of Science in Accounting and went on to work as an accountant and tax preparer. Melake didn’t stop there. He decided to open a restaurant called UniontownBar & Grill in DC. His determined spirit meant he was always working hard and staying on his feet. Melake grew up surrounded by an abundance of love, family, and friends. Melake was truly one of a kind. He left his footprint on all of our hearts forever. His legacy will be cherished and remembered endlessly. He leaves to cherish his memory: His Wife, three children, grandchildren, siblings, extended family, friends and community. Melake’s incredible spirit will live on in our hearts and his Marathon & Legacy will continue on forever. “Blessed are those who mourn, for they will be comforted.” — Matthew 5:4

Melake Gebre of Mendefera, Eritrea laid his captivating eyes to rest on December 1st, 2020. Melake had a long fight with cancer and finally went home to be with our Lord and Savior. Melake Gebre, Son of Gebre Yohannes and Dahab Gebre was born... View Obituary & Service Information

The family of Melake Gebre created this Life Tributes page to make it easy to share your memories.

Send flowers to the Gebre family.