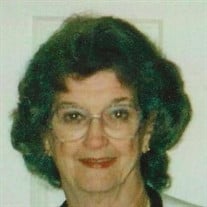 Mary Agnes Boland of Alexandria, Virginia, passed away at the age of 93 on December 23, 2020. Mary was born March 25, 1927, in New London, Connecticut; she was the daughter of the late Mylo C. and Anna J. Keck. Mary was preceded in death by her husband, Arthur Francis Boland. Mary is survived by ¬¬¬her daughters: Annamarie (Rick) Mays, Susan (Mike) King, Brigitte (Jack) Ferrick, and Ginger (Dale) Robertson. Grandchildren include Nicole (Joe), Shane, Kyle (Jenni), Megan (Will), Jack (Sarah), Ethan (Katie), Travis (Rachel), Lauren, Tara (Josh), Eddie (Denisse) and Brett. Great grandchildren include Luke, Zack, Lindsey, Isabel, John, McKinlee, Leah, Riley, Logan and preceded in death, Madison. Mary was a caring, generous wife, mother, grandmother, great-grandmother, friend to her neighbors and friends. Mary, daughter of Navy Lieutenant, grew up all over the United States from East Coast to West Coast, her favorite place being San Diego, California. When she was younger, she worked as a soda jerk and would go roller skating in Old Town Alexandria at the Rink. She graduated from Mount Vernon High School in 1944 where she was in a sorority. After high school, she worked for United States Mint. On July 3, 1951 she met her future husband at Glen Echo Park, Maryland at a dance. Arthur dressed in his Marine uniform asked her to dance and told her she had to because it was his birthday. She said, “What a line”. He took out his license and showed her it was indeed his birthday. They were married on January 19, 1952 at the little white church known as St Louis Catholic Church. Once again, Mary would travel, calling home to Pensacola, Florida, and Camp LeJeune, North Carolina; spending time on the golf course or beach. Settling in Alexandria, Virginia. Art and Mary would call Virginia Hills home for 68 years. They raised four daughters and were very active in their schooling, sporting and various activities. Mary was swim team representative for Virginia Hills Swim Club for many years and a timer at meets. She would organize swim-a-thon and her and Art chaperoned many events at the swim club. As the children grew, Mary along with Art helped to organize the Hayfield Athletic Boosters Club and was one of their first presidents. Her husband Art helped build the concession stand with many of the other dads. She spent many nights in the outdoor and indoor concession stand. She opened the indoor concession stand every day for students’ afterschool so they could grab something to eat before staying after for studies or sports. They were avid sports fans, especially for wrestling and would host the hospitality room for all the District meets and would travel all over for State Wrestling Meets. During this time, she was an active member of the AVSA African Violet Society of America. AVSA is made up of members around the world. Mary and Art attended yearly conventions around the nation. She would compete with her plants and design. She was a judge, parliamentarian and was elected President of the Society in 1990. At one point, Mary had over 500 plants in her basement. The friendships they made through the Violet Society was dear to her heart. Together, they watched their grandchildren open presents, driving to all four daughters’ home on Christmas morning. In later years, they watched the grandchildren play in various little league, high school, and collegiate sports. They were both avid Nationals fans and loved going to John Marshall Library. Mary was a proud Marine Wife, Mother, Volunteer, and generous individual. She believed that family, especially children come first. She will be greatly missed by her family and friends. Please contact the family for viewing and funeral service information. The service will also be live-streamed. In lieu of flowers, memorial donations may be made to the or AVSA PO Box 22417 Beaumont, TX 77720-2417 or Marine Corps Heritage Foundation, 18900 Jefferson Davis Highway, Triangle, Virginia 22172 or online at www.marineheritage.org.

Mary Agnes Boland of Alexandria, Virginia, passed away at the age of 93 on December 23, 2020. Mary was born March 25, 1927, in New London, Connecticut; she was the daughter of the late Mylo C. and Anna J. Keck. Mary was preceded in death by... View Obituary & Service Information

The family of Mary Agnes Boland created this Life Tributes page to make it easy to share your memories.

Mary Agnes Boland of Alexandria, Virginia, passed away at the...

Send flowers to the Boland family.