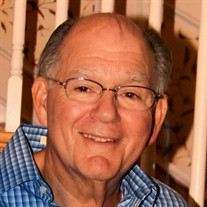 Born December 24, 1937 in Chicago, Mark E. Shoob, of Reston, VA passed away April 19, 2022, peacefully surrounded by his loving family. He is survived by his wife of 33 years, Sara, his children David Shoob (Melisa Harder) and Sarah Shoob-Fisken (Bill Dooley) from his former wife Deanna Shoob. He was preceded in death by parents Max and Edna, his daughter Marla, and brother Stuart. Mark graduated from Arizona State University, later being inducted into the school’s Hall of Fame for Public Programs. He completed his Master’s Degree in Public Administration at American University. Mark moved to Washington, D.C. in 1961 to work for the Federal Government, retiring as the Department of Education’s Deputy Commissioner in the Office of Special Education and Rehabilitation Services. During his 42 years of dedicated service, he was instrumental in positive change and worked tirelessly to advocate for individuals with disabilities. He strove to make community a better place. He was the founder, a board member and the second president of the Opportunities (OP) Shop. He tutored young children, volunteered in English as a Second Language classes, and helped students pass citizenship tests. Mark retired to a rich life with Sara, traveling, enjoying summers in Colorado, and being the best father and grandfather to his four granddaughters, Alana, Natasha, Isabella and Ava. His family was paramount in his life, and he could be counted on for fun times, unconditional love, and great advice. Many relied on his fair counsel, measured and empathetic wisdom, as well as his steadfast reliability in every situation. He will be greatly missed by many loyal friends and family. A funeral service will be held at Temple B’nai Shalom, 7612 Old Ox Rd., Fairfax Station, VA on April 21 at 11:30AM. Interment King David Memorial Gardens. In lieu of flowers, the family would like you to consider a donation to the Rocky Mountain MS Center www.mscenter.org or Cornerstones www.cornerstonesva.org

The family of Mark Edward Shoob created this Life Tributes page to make it easy to share your memories.