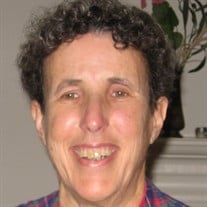 Marjorie Weber (78) of Alexandria, VA died peacefully at her home on August 15, 2021 after a long illness. She is survived by her son Aaron Weber (Liane), grandsons Jonah and Nathan Weber and sister Susan Burstein (Herbert). Outdoor graveside funeral services will be on Tuesday, August 16th at 1 PM at the Agudas Achim Cemetery located just off South Payne Street and Jefferson Street in Alexandria. She was born in 1943 in Hartford Connecticut and grew up in West Hartford with her loving parents, Israel and Pat, sister Susan, and a wonderful and close-knit extended family of grandparents, aunts, uncles and cousins. She went to college in Boston and lived in Cambridge afterwards. During that time she made a friend, Debbie Weber, to whom Marjorie introduced her cousin, George Perry. After George and Debbie were married, they were able to successfully “repay the debt” when Marjorie married Debbie’s cousin Charney. Their marriage lasted for 48 years of devotion until his death in 2019. Marjorie and Charney lived in the Berkshires for several years where their son, Aaron was born in 1975. As a testament to her loyal, caring, giving and open nature, they made friends there that would last the rest of her life. In 1980, they moved to Fairfax and settled in their permanent home in Bush Hill in 1987. The whole family were active and enthusiastic members of Agudas Achim Congregation where again, they made many close connections that lasted the rest of her life. It is no surprise that the friendships she made with the parents of Aaron’s friends were also life-long relationships. While Aaron was growing up, Marjorie was able to find what is now called work-life balance by doing freelance copy editing of fiction and non-fiction novels so that she could be present for her family as much as possible while also engaging in a career that she loved. Later in life she enjoyed the variety of working on the newsletters and magazines of some of the many associations based in Alexandria. Doing this work also allowed her time to do the two things she loved most after her family: traveling back to New England and spending as much time as possible at the beach. In her later years she was able to expand her love even more to Aaron’s wife, Liane, and her grandsons, Jonah and Nathan, for whom her pride and excitement had no limits. We are all so deeply grateful to the incredible number of incredible friends and family members, both immediate and extended, who provided so much love and support, both physical and emotional, during the last years of her life as she became progressively sicker. The amount of love that she received back is the loudest and clearest testament to who she was and the life she lived. Messages of condolence can be sent to Aaron and Liane Weber, 26 Lake Street #1, Arlington, MA 02474 Memorial contributions can be made to: Friends of Huntley Meadows, Agudas Achim Congregation, or World Central Kitchen

The family of Marjorie Ruth Weber created this Life Tributes page to make it easy to share your memories.

Marjorie Weber (78) of Alexandria, VA died peacefully at her...

Send flowers to the Weber family.