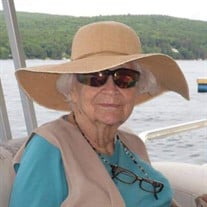 Marjorie May (Killelea) O’Neil, 97, passed away January 25, 2020 at The Fairfax in Ft. Belvoir, Virginia. Her family would like to thank the staff and nurses of The Fairfax, the Life Matters aides and Vitas Hospice for all the special care she received from them especially at the end. Born in Leominster, Massachusetts, in 1922 she lived a long, full and happy life. Always a singer and artist she pursued those interest when she enrolled at Fitchburg State Teachers College in 1939. Besides getting her education degree, she met the love of her life, John E. O’Neil, while there. They both sang and performed in College productions, the highlight being when Marj was selected as “Mabel” in the Pirates of Penzance. Her major interests were put on hold when WWII began, and “Jack” enlisted in the US Navy. Graduating in 1943, she started teaching school but also worked part time at an airplane parts factory. Somehow she found time to sing in a band that performed around New England at that time. Jack’s ship, the USS Columbia “The Gem of the Ocean”, was stationed in the Pacific, and there were many anxious moments not just for her crew, but for those at home waiting for good news of their loved ones. 1945 brought the end of the War, and Jack back to Marj. They wasted no time and married in December of that year. Starting a family was foremost. Jack left the Navy and was teaching for a few years, but circumstances and a quickly growing family saw him re-enlist and make a career of the Navy. Marj and Jack raised seven children together, living in seven other states before settling in Virginia. Everywhere they lived music played a large part of their lives, joining choruses and church choirs wherever the family was stationed. Marj taught music and art, and was a choir director at various locations across the country. When settled in Virginia, she spent many years as a docent at the National Gallery of Art and at Gunston Hall. She also took her painting more seriously, displaying her works in exhibitions and art shows throughout Northern Virginia. Marj lost Jack in January of 1994 and her daughter Kathleen Mary in August 1966. She is survived by her sister, Joan Thurston of Laconia NH and her six children. Always “Mom” to the children, she was “Grammy” to her 15 grandchildren and “GG” to her 9 great grandchildren, she was a lady of elegance and role model to all. Though Jack wasn’t around for the Red Sox 4 World Series Championships, Marj enjoyed those as well as her beloved Washington Nationals World Championship Win this past year. Baseball was her game of choice and she was one of the Nats biggest fans, even attended a few games during the past few years and never missed a game on TV. Her children and their spouses are; John E. O’Neil Jr. USN (ret.) (Carol) of Jacksonville FL, Stephen M. O’Neil (Jean) of Plymouth MA, Susan O’Neil Wernik (Joseph) of Florence MA, Brian P. O’Neil (Theresa) of Beverly Shores IN, Maureen O’Neil Sturgill (Phil) of Alexandria VA, Thomas J. O’Neil (Diana) of Leesburg VA; her fifteen grandchildren are, Kristin, John, Kelly, Kate, Vanessa, Andrew, Phillip, Sarah, Connor, Colleen, Emma, Tyler, Stephanie, Jessica, Sean. Besides the nine great-grandchildren she has many nieces and nephews. Visitation will be held Friday January 31, from 2:00-4:00PM and 6:00-8:00PM. Internment and services to be scheduled at Arlington National Cemetery at a later date. In lieu of flowers, donations may be made to the American Cancer Society.

Marjorie May (Killelea) O&#8217;Neil, 97, passed away January 25, 2020 at The Fairfax in Ft. Belvoir, Virginia. Her family would like to thank the staff and nurses of The Fairfax, the Life Matters aides and Vitas Hospice for all the special... View Obituary & Service Information

The family of Marjorie May O'Neil created this Life Tributes page to make it easy to share your memories.

Send flowers to the O'Neil family.