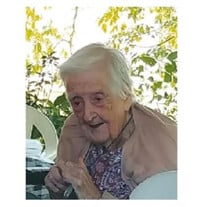 Marion A. Frieswyk passed away Thursday, August 26, 2021 in Fairfax, VA after a brief illness. She is preceded in death by her husband, Henry Frieswyk; her son, Henry Frieswyk, Jr.; her daughter-in-law, Consquella Frieswyk, and her parents, Lynn and Ethelind Armstrong. She is survived by her children, Sandra, David (Barbara), and Susan Frieswyk; daughter-in-law, Lois Frieswyk; grandchildren, Matthew (Tania), Nathan (Devon), and Jonathan Frieswyk; great-grandson, Holden Henry Frieswyk, and a host of loving nieces and nephews. Born and raised in Hamilton, New York, Marion attended the State University of New York (SUNY) Potsdam, where she received a degree in education with an interest in Geography. At the recommendation of her Geography professor, she then enrolled in a summer program in War Studies at Clark University in Worcester, Massachusetts, designed to train students in subjects related to geography that would be useful during WWII. The program consisted of a series of week-long courses taught by experts in each field. A visiting professor noticed that Marion, along with co-student Henry Frieswyk, showed a talent for Cartography. He asked both to immediately leave the program, move to Washington, DC, and work for him at the Office of Strategic Services (OSS), in their newly formed mapping division. Henry and Marion worked together and eventually married in 1943. Both stayed with the Cartography Division through the end of the war and beyond, as it transitioned to the State Department when OSS was disbanded at the end of the war, and again as it transitioned to the newly created Central Intelligence Agency (CIA) in 1947. Marion remained at CIA until the mid-1950s. Henry stayed until 1980 when he retired after serving as the Director of the Cartography Division. The Cartography Center, as it is now known, recently celebrated 75 years of continuous operation, to which Marion was invited and recognized as the last surviving member of the original OSS cartography group. After leaving government service, Marion continued to make important contributions by raising a family, working in the local community, and working in the local school system. Marion worked closely with the local Boy Scout troop and raised two Eagle Scouts. She worked as a substitute teacher, served on the PTA, of which she was a lifetime member, volunteered to establish the school library at the newly opened elementary school, and worked closely with school administrators whenever the need arose. She was active in her church, shepherding her husband and children to and from choir rehearsals and using her excellent sewing skills to produce many costumes for the church’s Gilbert and Sullivan troupe. A beloved matriarch of both the Frieswyk and Armstrong families, Marion helped raise several generations of children and continued to provide them with guidance and support into adulthood. A popular program she and Henry ran was to invite nieces and nephews to visit Washington, DC, for a week between their junior and senior years in high school, during which she gave them the “grand tour” of all the monuments and experiences available there. She wasn’t happy until they were completely exhausted! After Henry’s death in 1997, she moved to Virginia where she made many new friends and continued to serve the community in many ways. Relatives and friends may call at Jefferson Funeral Chapel, 5755 Castlewellan Drive, Alexandria, VA on Friday, September 17, 2021 from 6-8pm. A funeral service will be held on Saturday, September 18, 2021 at Westwood Baptist Church, 8200 Old Keene Mill Rd., Springfield, VA 22152 at 11am. Internment at Resurrection Cemetery in Clinton, MD will take place at a later date. For those wishing to make a memorial contribution in Marion’s name, donations can be made to Ecumenical Community Helping Others (ECHO) at www.echo-inc.org. Please view and sign the family guest book at www.jeffersonfuneralchapel.com.

Marion A. Frieswyk passed away Thursday, August 26, 2021 in Fairfax, VA after a brief illness. She is preceded in death by her husband, Henry Frieswyk; her son, Henry Frieswyk, Jr.; her daughter-in-law, Consquella Frieswyk, and her parents,... View Obituary & Service Information

The family of Marion A. Frieswyk created this Life Tributes page to make it easy to share your memories.

Send flowers to the Frieswyk family.