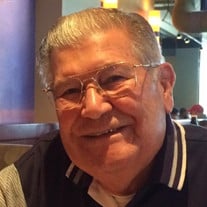 On Monday, January 20, 2020, Manuel C. Leal Jr., of Fairfax, VA passed away with his beloved children by his side, he was 88 years old. Manuel was born on October 8, 1931 in Santa Rosa, Texas to Manuel and Luz Leal. A proud patriot, Manuel served in the United States Army over twenty years. A veteran of both Korea and Vietnam, Leal was awarded a Bronze Star and retired as a Master Sergeant with honors. In 1958, Manuel married the love of his life, Martha, in Alexandria, VA. Shortly after they married, Manuel’s military career took the couple to Orleans, France; while there, the couple welcomed their two children, Diana and Ray. Manuel’s assignments lead the family to Missouri, Illinois, Augsburg, Germany, and back to Virginia. In 1972 Manuel joined the United States Government in the Food and Drug Administration where he stayed until 1993. Upon his retirement, Manuel devoted time to traveling with Martha to visit family in Texas, West Virginia, Florida, and California; he joined Martha in caring for their school-aged grandchildren (whom lovingly referred to the pair as Nanny and Papa) and hosted countless family cookouts. Throughout his life Manuel made time to fish, read westerns, and tend to Martha’s beautiful roses in the couple’s garden. Manuel lost his beloved Martha to ovarian cancer in 2008. As a widow, Manuel honored his late wife by continuing to visit her family in West Virginia. He spent time with his children and regularly traveled to Texas to visit his cousin and best friend, the late Gumecindo Leal Sr. He was a devoted grandfather, attending graduations, holidays, and the wedding of his second granddaughter. A man of faith, Manuel was a parishioner of Holy Spirit Catholic Church in Annandale, VA for over thirty years. Manuel is preceded in death by his wife of 49 years, Martha; brothers, Santos and Servando Leal; and cousin, Gumecindo Leal Sr. He is survived by his daughter Diana (Kurt) Christensen of Garner, NC; son Ray Leal of Stafford, VA; grandchildren Melissa Christensen of Boston, MA; Lindsay (David) Zappala of Raleigh, NC; Kaleigh and Austin Leal of Richmond, VA; brother Esequiel Leal of Santa Maria, CA; and numerous nieces and nephews. Relatives and friends may call at Jefferson Funeral Chapel, 5755 Castlewellan Dr., Alexandria, VA on Sunday, January 26, 2020 from 3:00-7:00PM. Mass of Christian Burial will be held at Holy Spirit Catholic Church, 5121 Woodland Way, Annandale, VA on Monday, January 27, 2020 at 10:30AM. Interment at Arlington National Cemetery at a later date. In lieu of flowers, donations may be made in Manuel’s memory to Wounded Warrior Project or Georgetown Lombardi Comprehensive Cancer Center.

On Monday, January 20, 2020, Manuel C. Leal Jr., of Fairfax, VA passed away with his beloved children by his side, he was 88 years old. Manuel was born on October 8, 1931 in Santa Rosa, Texas to Manuel and Luz Leal. A proud patriot, Manuel... View Obituary & Service Information

The family of Manuel C. Leal, Jr. created this Life Tributes page to make it easy to share your memories.

Send flowers to the Leal, family.