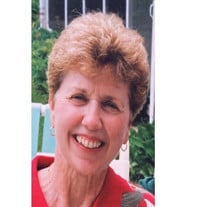 Madeline Carol Quill “Carol,” born on November 3rd 1946, died peacefully on Sunday, November 29th at the age of 74 with family by her side. She was the most beloved sister and aunt who has now joined the angels in heaven and been reunited with her family who have passed before her. Carol is survived by her siblings, sister Kathleen Lee and brothers Terrence Quill and John Quill; and by many nieces, nephews and grand nieces and nephews. She was preceded in death by her parents, Madeline and Thomas Quill; sisters Mildred Watson, Mary Wilson, Jo Ann Bennett, Maureen Orndorff; brothers Brian Quill, Patrick Quill, Thomas Quill Jr., and Michael Quill. Carol was born and raised in Washington D.C. and was a graduate of Northwestern High School in Hyattsville Maryland. Later, she settled in Alexandria, VA where she took great joy and devotion in being with and caring for her mother, Madeline. She spent her career working for the Department of Commerce and retired from the Department of Labor in 2001. In retirement, Carol enjoyed playing tennis several times a week, attending Mass, volunteering, taking trips to Texas to visit family and the occasional visit to the casino. She was an active and dedicated member of the Catholic faith and attended St. Michael Catholic Church in Annandale, VA. Her generous heart, joyful spirit and positive outlook was rooted in her deep faith in God. She exemplified a holy and devout woman and her dedication to Christ was a great example for all. Carol was held in such high esteem, as the glue connecting her large family together. and was always quick to offer support to anyone in need. She took on her role as Aunt with so much love and devotion and will be remembered for her extreme thoughtfulness, sense of humor and ability to make each family member feel special. She will be missed and forever in our hearts until meeting again in eternity.

Madeline Carol Quill &#8220;Carol,&#8221; born on November 3rd 1946, died peacefully on Sunday, November 29th at the age of 74 with family by her side. She was the most beloved sister and aunt who has now joined the angels in heaven and been... View Obituary & Service Information

The family of Madeline Carol Quill created this Life Tributes page to make it easy to share your memories.

Send flowers to the Quill family.