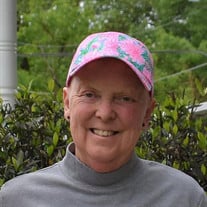 Linda Marie MacDonald (Fredie), 68, of Alexandria, VA, died peacefully at home on September 18, 2021, after a 6 ½ year fight with pancreatic cancer. She was preceded in death by her beloved parents Harold and Annabelle, and her brother Tim.... View Obituary & Service Information

The family of Linda M. MacDonald created this Life Tributes page to make it easy to share your memories.

Send flowers to the MacDonald family.