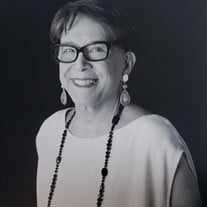 LINDA SUE LINER June 25, 1951 ~ May 10, 2020 Linda was the daughter of Milton and Catherine (deceased in 2015 and 2014, respectively). As the daughter of a Holocaust survivor (Catherine), Linda was faithful and Judaism was an essential part of her life. Linda was also, beloved mother to Joseph, mother in law to Shellye, sister to Debbie, sister in law to Mark, and aunt to Ariel and Isaac. Linda was a woman with such panache, laughter, and blatant honesty. She was never afraid to say what she meant and only lived life the way she wanted to live it. She was, indeed, her father’s daughter and not just because of her hair line—but more in the sense of how Frank Sinatra once said, “I did it my way.” Linda would bee-bop around in her 2009 blue Honda Civic, scrapping any pole she could find while going through the bank teller drive-through or simply trying to get out of her office garage. We could never get tired of her tongue-and-cheek humor. Linda could blindside you with a joke with just one word—which can make driving a little difficult when you’re laughing so hard you have to pull over. From adopting Joseph from San Jose, Costa Rica to dancing with gypsies in the Mediterranean to getting lost in the streets of Warsaw in the middle of the night looking for a hospital to getting even more lost driving through northern Spain looking for the airport on the roads of what ended up being in France, Linda was always up for an adventure on the fly. She loved to capture some of her traveling experiences or express the deepest corners of her imagination in her acrylic and oil paintings. Further, Linda LOVED going to the Kennedy Center and supporting the local art community, almost as much as she loved surreptitiously sleep-eating someone else’s chocolate cake in the middle of the night. Paired with her eccentric humor, Linda was an altruist. From civil rights to the refugee crisis, Linda always extended a helping hand wherever she could. She attended protests in DC, assisted with political campaigns that supported relief for underprivileged persons, led meditations at the local prison, and was a dedicated and decorated civil servant for nearly 40 years in DOJ’s Civil Division through five administrations before retiring in 2013. Linda touched the lives of everyone she met, and even those she hadn’t simply by being herself and believing in others. Battling cancer is a challenge and death is a path we all must take. It’s hard to exceed one’s level best, but by golly, Linda did it. She gave everything her all because nothing less would suffice. She adored her son and dearly loved her family. We are bereft. But in no way, will she or what she taught us ever be truly gone. photography by: Joan Brady Photography

LINDA SUE LINER June 25, 1951 ~ May 10, 2020 Linda was the daughter of Milton and Catherine (deceased in 2015 and 2014, respectively). As the daughter of a Holocaust survivor (Catherine), Linda was faithful and Judaism was an essential part... View Obituary & Service Information

The family of Linda Sue Liner created this Life Tributes page to make it easy to share your memories.

Send flowers to the Liner family.