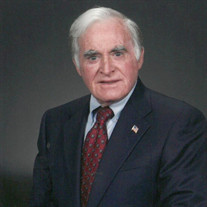 Col. Lewis Jordan Ashley (USA Retired) of Alexandria, Virginia, died peacefully in his sleep on Oct 13, 2020. Lew was born in Charleston, WV, the son of Sewell Jordan Ashley and Macel Hyer. He moved with his family to Phoenix, AZ as a youth. He loved the wide-open desert environment and quickly adopted Phoenix as his hometown. After graduating from Phoenix Union High School, Lew volunteered for the U. S Army. Lew served in the U.S. Army, in a variety of command and staff assignments in the U.S. and overseas, including Korea and two tours of duty in Vietnam. As a Colonel he commanded an Infantry Brigade and later served as the principal assistant to the Under Secretary of the Army. He attended Syracuse University where he was awarded a BS Degree, Economics, and George Washington University where he was awarded an MBA, International Affairs. He was selected and served as a Fellow at the Harvard University Center for International Affairs for a year. After retiring from the Army, he worked as a professional staff member in the U.S. Senate for several years. This included service on the Senate Armed Services Committee, the Budget Committee, and as Legislative Director on the staff of a U.S. Senator. After leaving the Senate he served as Chief of the Budget Office, Conservation and Renewable Energy Division, DOE. He began work at the Army Materiel Command (AMC) as the leader of the Ground Combat Systems Team, Office of the Deputy Chief of Staff for Research, Development, and Acquisition. For over 20 years, Col. Ashley served as the Special Assistant to the Commander AMC on business/industry matters (Ombudsman). He was widely known and highly regarded by senior leaders of government and industry for his knowledge and understanding of each community and his ability to work with both, to address issues and develop timely solutions resulting in greatly improved support to war fighters. He was also active in community affairs and has served on: the Board of Directors of Commonwealth One Federal Credit Union, Alexandria, Virginia; the Advisory Board of Directors, Association of the U.S. Army; the Administrative Board, Aldersgate United Methodist Church, Alexandria, Virginia; and member and Chairman of the President's Advisory Council, Wesley Theological Seminary, Washington, D.C. Col. Ashley was predeceased by his son, Todd Ashley, and daughter Kathy Ashley. He is survived by his wife Linda, daughters Patricia Estey and her husband Chip, Kristen Henderson, 7 grandchildren and 10 great grandchildren. In lieu of flowers, memorial donations may be made in Lew's honor to Aldersgate United Methodist Church in Alexandria, Virginia. The burial will take place at Arlington National Cemetery on Jan 27, 2021 at 11:00 am.

Col. Lewis Jordan Ashley (USA Retired) of Alexandria, Virginia, died peacefully in his sleep on Oct 13, 2020. Lew was born in Charleston, WV, the son of Sewell Jordan Ashley and Macel Hyer. He moved with his family to Phoenix, AZ as a youth.... View Obituary & Service Information

The family of Col. Lewis Jordan Ashley created this Life Tributes page to make it easy to share your memories.