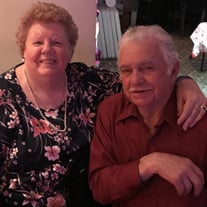 Lester Vernon Dove, Sr. of Franconia, Va. passed away in his home surrounded by his loving family after a long battle with cancer. Born in Franconia on August 21, 1939. Lester was one of ten kids born to the late Vernon Stout and Virginia Mae (McGuin) Dove. He is also preceded in death by brother Eugene Dove and brothers-in-law Stacey Cassidy, Leo Estes, and Norman Estes. He is survived by his wife of 54 years Vera Delores (Taylor) Dove, son Lester V. Dove, Jr. (Tina), daughter Sharon M. Hester (Ben), grandchildren Daniel Dove (Chloe Channon), Timothy Dove (Amber Clements), Victoria Hester, Brandon Hester, and Gabrielle Hester, and siblings Viola Estes of Dayton, VA., Louise (Robert) Barnowski of Alexandria, Va., Doris Cassidy of Alexandria, Va., Margie Estes of Warrenton, VA., Ralph Dove of Alexandria, Va., sister-in-law Barbara Dove of Hartwood, Va., Floyd (Linda) Dove of Boydton, Va., Herbert (Lynn) Dove of Bealeton, Va., and Leonard (Sharon) Dove of Alexandria, Va. Lester Sr. grew up on the family farm on Van Dorn Street and started his career as a fireman volunteering at Co. 5 Franconia Fire Department when he was 16 years old. He became a career firefighter in 1971. He was stationed at different stations in the county starting with Woodlawn, Penn Daw, and Lorton (he was considered a lifetime member there), and he medically retired in 1987 from station #10 Bailey's Crossroads, while also operating a family construction business since 1976. Lester married his sweetheart Vera Delores Taylor on November 13, 1965, who was also involved with the fire department. She was a majorette in the firemen parades and was also one of the queens of the Franconia Fire Department. She is also a lifetime member of the Franconia Fire Department's ladies auxiliary. They started their family in 1968 with the birth of a son Lester Jr. and then later in 1970, they had a daughter, Sharon. Lester Sr. ran a successful construction business in Franconia called L. V. Dove & Son, Inc. with the help of his son, Lester Jr., who is still running the business. He would help anybody out that needed it. In the wintertime, he would clear snow from the neighbors' driveways and roadways or help out whatever they would need. Everyone always came by to ask for advice or just chat. He didn't believe in buying anything new and wanted to try and fix whatever was broken. He spent time with each of his grandkids and tried to teach them how to work on cars and run machines. He just wanted them all to be successful. He was so proud of them all. He always avoided confrontation. He never wanted to argue and hated to see anybody cry. This got him taken advantage of a few too many times in his life as well. As he got older, he was still doing construction jobs, and he looked forward to the weekends when he went dancing on Friday and Saturday nights at different clubs in the area such as Franconia Moose Lodge, JW's (The Mixing Bowl), Paradiso, and other places that he could follow around his favorite band, "Route 66." Lester Jr. worked with him up until the day before he went into the hospital. He had to get the job done before he went in to see why he was losing feeling in his hand. He was operated on last May on Memorial Day to remove a cancerous brain tumor. After the operation, he was paralyzed on the right side and spent the rest of his life in a wheelchair. The family took turns helping take care of him over the next several months. His wife was his primary keeper and made sure he was comfortable day and night, no matter who she had to call to make that happen. He passed on Friday, March 27, 2020, due to complications with this awful disease. In lieu of flowers, the family would like contributions made to Franconia Fire Department or Franconia Moose Lodge in his honor. They would also like to thank all of our first responders who helped out through this sickness and distress. In light of everything that is happening in the world now with "COVID-19," the family will have a private burial at his family cemetery. There will be a large memorial later this summer, where he will have a proper firefighter's gathering for all of his friends and family.

Lester Vernon Dove, Sr. of Franconia, Va. passed away in his home surrounded by his loving family after a long battle with cancer. Born in Franconia on August 21, 1939. Lester was one of ten kids born to the late Vernon Stout and Virginia Mae... View Obituary & Service Information

The family of Lester Vernon Dove Sr. created this Life Tributes page to make it easy to share your memories.

Lester Vernon Dove, Sr. of Franconia, Va. passed away in his...

Send flowers to the Dove family.