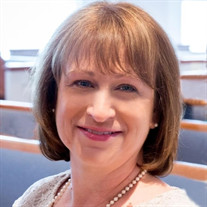 Leslie Ann (Sisak) White of Springfield Va. God called her home on Sunday morning July 5, 2020 after a yearlong battle with a glioblastoma brain tumor. Leslie was born 10 April 1963 to Captain James and Virginia Sisak at Fort Riley, Kansas. She was the beloved wife of 27 years to William Arnold White and proud loving mother of Chris White. She was preceded in death by her father in 2001. Leslie’s father was in the Army and moved many times to various posts, but she and the family called Newport News, Virginia home. She was a graduate of Denbigh High School, Class of 81 and was active with class reunion committees. She attended Old Dominion College and later graduated from Christopher Newport College with a degree in accounting. After marriage in 1993, the Navy transferred Bill and Leslie to Washington DC and they settled in Springfield, VA where she soon went to work for the Bureau of Affairs, Inc which later became Bloomberg BNA. Leslie retired from Bloomberg on 1 July 2020 as the General Accounting Supervisor. Leslie was active at church with her Bible Study group. She enjoyed knitting and crocheting where she helped make baby blankets in support of the Church’s Sanctity of Life Ministry and signing for the deaf when she attended Northside Church of Christ in Newport News VA. In addition to her love for playing board games and cards, she enjoyed putting together puzzles which is something she passed on to Chris. Her other big passion in life was supporting Chris and his sports endeavors where we literally wore out a car attending lacrosse games. As she came from a big family, her family was especially important to her. Family gatherings were always major events for us. In addition to being survived by her mother Virginia; she is survived by her cherished brothers and sisters; Martha Paige (Derwick), their daughter Kelly Griffin (Aaron) and their sons Brayden and Sawyer (Raleigh NC); brother John Sisak (Raleigh NC); Paul Sisak (Vanessa) and daughter Karina (Coral Gables FL); Kathryn Richardson (Dale) and son Jack (Raleigh NC); Mark Sisak (Jennifer) and son Ean and daughter Lauren (Cary NC.); and Rachel Logan (David) and sons Nolan and Cooper (Pittsburgh PA). Also she is survived by God Parents Henry and Dorothy Grenesko (Bluffton SC), mother-in-law Marie and brother-in-law Ralph (Graham NC), brother-in-law Jim White (Ann) and children Timothy, Tara, John and Jacob (Poulsbo WA), and aunt and uncle May and Ray Sisak formally of Sewickley PA (Phoenix AZ). Leslie was a firm believer in Christ. She used her illness as a testament of her faith to so many others for she believed in salvation and healing. As stated by Paul in 1Peter 5:10: “The God of all grace who called you to his eternal glory in Christ, will himself restore, establish strength, and support you after you have suffered …….” The family would like to thank the following for the support throughout the last year: Dr Kester Philips and his Nurse DeeAndra Shoemaker from the Inova Schar Cancer Center; Health Care workers Violet Browne and Alfreda Tydings from Thrive at Home health care; Shannon Atkinson, Monique Payton, Jacqueline Buchanan, and Gail Owens from Encompass Health, the meal providers from Calvary Road Baptist Church and the neighborhood, the Capital Caring Staff at the hospital, and the Nurses and Staff of the Stroke Clinic at the Inova Fairfax Hospital. Lastly, Chris and I give our heartfelt thanks to Leslie’s mother Virginia, sisters, Martha, Kathy, Rachel, and best friend/honorary sister Katie Lemon for all the steadfast love and support provided to Leslie over the last year. A visitation will be held Friday, July 10 from 6-8PM at the Jefferson Funeral Chapel 5755 Castlewellan Dr, Alexandria, VA 22315. There will be a visitation at Calvary Road Baptist Church, 6811 Beulah Street, Alexandria, VA 22310 on Saturday, July 11 at 1PM followed by a Celebration of Life / Memorial service at 2 PM. In lieu of flowers, please considering making a contribution in Leslie’s honor to one of the following charities: National Brain Tumor Society at www.braintumor.org; Capital Caring Hospice at www.capitalcaring.org; Fellowship of Christian Athletes (FCA) www.my.fca.org/donate, Boys Lacrosse Ministry held a special place in Leslie’s heart. Through this ministry she got to see many young boys and girls be impacted along their faith journey through sports.

The family of Leslie Ann White created this Life Tributes page to make it easy to share your memories.

Send flowers to the White family.