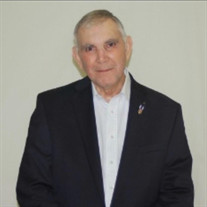 Kenneth Ira Lutz of Springfield, Virginia died Thursday, May 21, 2020 at the Manassas Health & Rehabilitation Center where he resided since November 2018. He had Parkinson’s disease. Ken is survived by his wife Lorraine (nee Savitsky), and daughters Karen Santone (Louis), Nancy Lansing (Robert), and granddaughter Allyson Lansing. Ken was preceded in death by his parents Ira and Dorothy Lutz (nee May), his sister Beverly Sullivan, and brother Dewaine Lutz. Other relatives include: Ken’s sister Audrey Ehrhardt, sister-in-law Ruth Ann Lutz, cousins Carol Sukowski, Robert Harrington, Judith Davis, and several nieces and nephews. Kenneth Ira Lutz was born March 9, 1932, in Nanticoke, Pennsylvania. After graduating from high school, Ken enlisted in the United States Army in 1950 and served as a corporal in the infantry during the Korean War where he received the Purple Heart, two Bronze Service Stars, and a Good Conduct Metal. In 1954, Ken received an Honorable Discharge. Following his military service, Ken worked in the garment industry, and in 1962 he married Lorraine Savitsky and they moved to West Pittston, Pennsylvania where they raised their two daughters. After retiring from the garment industry, Ken went to work at the Veterans Administration Hospital in Wilkes-Barre, Pennsylvania until he retired for good in 1997. Ken was a long-time member of the Saint John’s Lutheran Church in Pittston, Pennsylvania where he gave faithful service in various roles, including superintendant of the children’s Sunday school program for over 25 years, as well as reader and assistant to the minister. In 2005, Ken and Lorraine moved to Springfield, Virginia to be closer to their two daughters. They became members of Prince of Peace Lutheran Church in Springfield where they were welcomed by a loving church family, made many friends, and enjoyed attending services, the bible classes, and various other activities. In 2010, Ken was diagnosed with Parkinson’s disease and later received in-home care until November 2018 when he was moved to the Manassas Health & Rehabilitation Center memory care unit where he received kind and loving care until he passed away from complications of Parkinson’s and dementia. Funeral and burial arrangements are pending. The family wishes to express heartfelt gratitude to the staff of Manassas Health & Rehab for the care Ken received there. Ken’s family asks that donations be made to Prince of Peace Lutheran Church, Springfield, Virginia 22152.

Kenneth Ira Lutz of Springfield, Virginia died Thursday, May 21, 2020 at the Manassas Health & Rehabilitation Center where he resided since November 2018. He had Parkinson&#8217;s disease. Ken is survived by his wife Lorraine (nee Savitsky),... View Obituary & Service Information

The family of Mr. Kenneth Ira Lutz created this Life Tributes page to make it easy to share your memories.

Send flowers to the Lutz family.