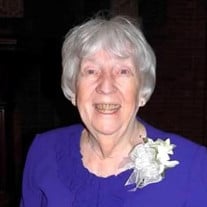 Katherine Constance Fuller passed away on, Friday, September 20, 2019 and was born in 1930 to two Lithuanian immigrants, the late Anthony John Sadouskas, Sr. and Katherine Helen Guokas Sadouskas. She is also pre-deceased by a brother, Anthony John Sadouskas, Jr. and a beloved nephew, Anthony John Sadouskas III. Katherine was a lifelong resident of Alexandria, VA, having lived in only two homes during her lifetime. She and her late husband James (Jim) Joseph Fuller, Sr who passed in 2001. They met while both working for the former Aero Chevrolet in downtown Alexandria, and were married for over 51 years and had two children. They were very active in both their neighborhoods and their churches, St. Mary’s Catholic Church and St. Louis Catholic Church. During her early life, Katherine worked as a bank teller at the former First and Citizens National Bank, and when she returned to work after her children were grown, she was a receptionist for several local businesses. She loved meeting new people and worked full time into her mid-eighties. When she wasn’t shopping with or for her family, she loved gardening, flower arranging, crochet, crafting, and numerous home improvement projects. Katherine also loved keeping her Lithuanian heritage and traditions alive for her family, especially cooking much-coveted dishes like kielbasa and angel wing cookies (cruscikis). Most of all, her sweet, encouraging, and patient nature always ensured she had either a child or a pet wanting to sit in her lap! As a devoted wife and mother, Katherine’s family was the center of her life. Katherine is survived by her daughter Betty Fuller Andrews and husband Larry Andrews, and son James Joseph (Joe) Fuller, Jr. and wife Therese McGuire Fuller. She has five grandchildren: Jaimee Fuller Haas and husband Richard (RJ) Haas, Jennifer Fuller Merritt and husband Joel Merritt, Katherine (Katie) Andrews Oakes and husband Mike Oakes, Michael Andrews, and Timothy Fuller. She was also blessed with enough years to enjoy five great-grandchildren: Ryan Merritt, Piper Merritt, Mark Oakes, Emily Oakes, and Kaitlin Haas. As someone who naturally attracted people, Katherine is also survived by a host of extended family and friends, many of whom called her Grandma Fuller. Her energy, kindness, generosity, and love of life will be remembered by all who knew and loved her, and we rejoice that she now rests in the arms of Our Lord Jesus Christ and His Blessed Mother. A Mass of Christian Burial will be offered at St. Louis Catholic Church, 2907 Popkins Lane, Alexandria, VA 22306, on Tuesday, September 24, at 11 a.m. Preceded by visitation with the family beginning at 10:15 a.m. in the church. Burial at Mt. Comfort Cemetery will immediately follow the Mass. Flowers may be sent directly to the church.

Katherine Constance Fuller passed away on, Friday, September 20, 2019 and was born in 1930 to two Lithuanian immigrants, the late Anthony John Sadouskas, Sr. and Katherine Helen Guokas Sadouskas. She is also pre-deceased by a brother, Anthony... View Obituary & Service Information

The family of Katherine Constance Fuller created this Life Tributes page to make it easy to share your memories.

Send flowers to the Fuller family.