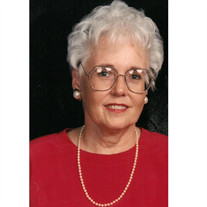 Karen Faye King Ketch was a happy, cheerful person. Born to Arthur William King and Fay Watson King on November 20, 1935 she was the apple of her daddy’s eye. In her early years she lived in a multi-generational home in the Avenues of Salt Lake City with her parents, her maternal grandparents, an aunt and great-aunt. When she was nine her brother Raymond was born and the family moved to Filmore Street, also in Salt Lake. Brad joined the family five years later. Karen attended South High graduating in 1954. She kept in touch with several of her classmates throughout the years. As a senior she worked at the Spudnut Shop where she met her future husband Clair who was attending the University of Utah. She married her sweet, quiet husband, Clair V Ketch, in July 1954 and had three children, all of whom survive her; Tracy Anderson (Robert), Valerie Nickerson (Donald) and Gregory Ketch (Karen). In addition, she is survived by her eight grandchildren, four step-grandchildren and 15 great-grandchildren (including her four step-grandchildren). Karen’s siblings and their wives, Raymond King (Gaye) and Brad King (MaryAnn) as well as numerous nieces, nephews, grand-nieces and nephews also survive her. Karen is predeceased by both of her parents. Clair joined the Marine Corps after graduating from U of U in 1954. There were some US assignments in their early married life. In addition to those, Karen, Clair and the girls also lived in Korea and Indonesia for a year each. During those two assignments Karen’s love of social interaction was a huge boon to the more reserved Clair. They were a very well balanced pair. While Clair finished up his job in Indonesia Karen and the girls returned to Utah pending Greg’s birth. Thankfully, Clair was back stateside when Greg came into this world. Not long afterwards they settled in Virginia and it’s been home ever since. Their neighborhood was a great place to rear their children and they continued to enjoy their home years after the children had moved out. Karen’s life was one of service to her family, her neighbors and many in her church. Finding new people to associate with was a pleasure. She was a social being so, in addition to providing a wonderful home for her family (and fresh baked cookies at least once a week), one of her great joys was being a Tupperware lady for over 30 years. Through that experience she met and kept many, many friends. As mothers go, she was one of the best; fun, goofy, loving and a seriously hard worker. We will miss her terribly but are so glad she joins her eternal companion.

Karen Faye King Ketch was a happy, cheerful person. Born to Arthur William King and Fay Watson King on November 20, 1935 she was the apple of her daddy&#8217;s eye. In her early years she lived in a multi-generational home in the Avenues of... View Obituary & Service Information

The family of Karen Ketch created this Life Tributes page to make it easy to share your memories.

Send flowers to the Ketch family.